At UN, official stresses role of parliaments in success of sustainable development agenda

Parliaments have a critical role in translating the new sustainable development agenda – which world leaders will adopt later this month at the United Nations – into real improvements for the lives of the world’s people, says the head of the Inter-Parliamentary Union (IPU).

“We are in politics because we want to make a difference in people’s lives. We want to enrich their lives. We want to help them live their dreams and this is the perfect opportunity to do so,” Saber Chowdhury said in an interview with the UN News Service on the margins of the Fourth World Conference of Speakers of Parliament taking place in New York from 31 August to 2 September.

About 180 parliamentary leaders from nearly 140 countries have gathered for the conference, which occurs every five years, to examine ways to effectively tackle global challenges to peace and democracy.

This year’s conference is expected to place particular emphasis on achieving the 17 sustainable development goals due to be adopted at a special UN Summit from 25 to 27 September in New York. The SDGs, as they are commonly known, will set wide-ranging targets to be met by 2030, including ending extreme poverty and hunger, promoting peaceful and inclusive societies and ensuring sustainable patterns of development and consumption.

“You now have a framework. You now have an internationally agreed document which we will have in a few weeks’ time here at the UN,” said Mr. Chowdhury. “We now need to deliver on that so that the trust and confidence that the people have place on us is respected.”

The summit outcome document, entitled “Transforming our World: The 2030 Agenda for Sustainable Development,” acknowledges the role of parliaments in translating the goals into concrete action through passing legislation, making budget allocations and holding governments accountable.

“This is the place where governments come and make pledges… they make a lot of promises. They make commitments. And we are basically here not to make pledges, but to make sure that the pledges that are made are in fact kept. And this is the job of parliaments,” noted the Bangladeshi national.

Mr. Chowdhury stressed that parliaments are a very important part of the puzzle when it comes to the success of the sustainable development agenda. “How parliaments respond to the SDGs, how they buy in, how they implement the SDGs will be critical to its success and implementation.”

He added that there is much that binds the IPU and the UN, most importantly the focus of both institutions on improving the lives of people.

“It is a singular focus on people, their well-being and their security, which is why I think, to a large extent, IPU and the UN are natural partners. If you look at the preamble to the Charter of the UN, it begins with the words ‘We the peoples of the United Nations,’ and IPU is the organization that is the global platform for elected representatives and institutions of the people.”

The Global Conference, organized by IPU and supported by the UN, is expected to conclude tomorrow with the adoption of a declaration which will feed into the Sustainable Development Summit. 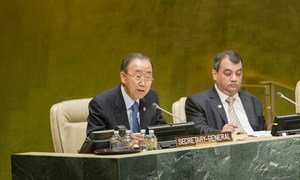 With speakers of parliament meeting at United Nations Headquarters at a moment when the world is gripped by multiple crises – displacement has soared to all-time highs and the threat of climate change grows by the day – Secretary-General Ban Ki-moon urged the legislators to help drive forward the new UN sustainable development agenda and ensure that civil society are equal partners in “building the future we want.”