The detection of a new case of Ebola in Sierra Leone over the weekend after the West African country had marked almost three weeks of zero cases has prompted the use of an experimental vaccine to fight the disease, according to the United Nations World Health Organization (WHO).

“Although no-one wanted to see more cases of Ebola virus disease in Sierra Leone, we kept all our teams on alert and ready to respond and close down any new transmission” said Dr. Anders Nordstrom, WHO Representative in Sierra Leone.

A team of experts conducting the so-called “ring vaccination” trial in Conakry, Guinea travelled to the Kambia district in Sierra Leone where the new case was reported on Saturday, WHO said in a press release.

The source of the Ebola virus transmission is being investigated and all the people who may have been in contact with the infected person are being traced, according to the health agency.

Interim results published last July show that the Guinea ring vaccination trial vaccine is highly effective against Ebola. The ‘ring vaccination’ strategy involves vaccinating all contacts – the people known to have come into contact with a person confirmed to have been infected with Ebola – and contacts of contacts.

Meanwhile, heightened surveillance for Ebola virus disease in Sierra Leone includes swabbing all people who have died at home and testing those swabs for Ebola virus.

WHO said on Saturday, 29th August, a swab taken from a woman who died aged around 60, in the village of Sella, Tonko Limba, Kambia district, tested positive for Ebola virus. 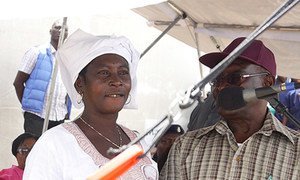 Sierra Leone today began its countdown to be declared by the World Health Organization as free of Ebola virus transmission as the West African nation’s President described the release of the last patient treated for the disease at a treatment centre as “the beginning of the end of Ebola.”