OCHA/P. Kropf
This building in Yemen was destroyed by airstrikes.
1 September 2015

The UN human rights office said today it is alarmed by the steep increase in the number of civilian casualties in Yemen’s Taiz governorate in recent weeks, as well as by the “untenable” humanitarian situation which is being made worse by the blockage of supply routes into Taiz city by local “popular committees” affiliated with the Houthis.

According to information gathered by the Office of the UN high Commissioner for Human Rights (OHCHR), an estimated 95 civilians were killed and 129 injured in Taiz, located near the southern tip of the country, during the past two weeks. Fifty-three of these civilian deaths occurred on 20 August, reportedly as a result of a series of airstrikes by Saudi-led coalition forces that hit 20 homes near Salah Palace in Taiz.

Local reports indicated that active fighters in the Houthi popular committees – community-level armed groups – were believed to be based in the Salah Palace at the time. The other 42 civilians were killed as a result of sniper and shelling attacks, reportedly by members of the Houthi-affiliated popular committees.

The UN human rights office on Tuesday also reiterated its concern regarding the near collapse of the healthcare system in Taiz, where all six public hospitals are no longer operational due to fighting in the vicinity. In addition, the Houthi-affiliated popular committees have taken up military positions nearby and hospital staff and others are fearful of the associated risks.

This has reportedly caused smaller private hospitals with limited capacity to be overwhelmed with the vast number of severely injured patients, as well as by the outbreak of dengue fever in the area. According to the UN World Health Organization, over 420 cases of dengue fever have been suspected since 25 August.

Meanwhile, OHCHR is highlighting another serious incident which took place on 18 August in Amran governorate. An estimated 21 civilians, including four children and two women, were killed and 28 others injured, reportedly after an airstrike by coalition forces hit the office of the Teachers Syndicate. The teachers had gathered to prepare for the final examinations of primary and secondary students.

The disastrous impact on the humanitarian situation of attacks by coalition forces on Hodeida port, which is a key entry point for humanitarian supplies and commercial imports into Yemen, has also been described by OHCHR as very concerning. It is urging all parties to allow and facilitate unimpeded passage of humanitarian relief.

Since the conflict in Yemen escalated in late March, OHCHR has documented some 6,631 civilian casualties, including 2,112 civilian deaths, and 4,519 wounded.

However, the UN says the actual numbers are believed to be much higher. 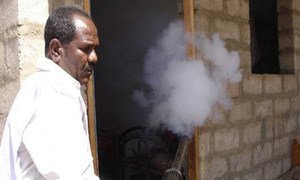 The United Nations World Health Organization (WHO) is appealing for a safe corridor to reach more than 3 million people in war-torn Yemen’s most populated governorate, Taiz, where “an extreme spike” in cases of dengue fever has been recorded over the past two weeks.