Securing rights over their land and natural resources is fundamental to the Sami people’s self-determination and a prerequisite for them to be able to continue to exist as a distinct people, an independent United Nations human rights expert said after a visit to the Nordic region.

Speaking at the end of a special conference organized by the Sami Parliamentary Council, the Special Rapporteur on the rights of indigenous peoples, Victoria Tauli-Corpuz said she was pleased that Norway, Sweden and Finland all pay considerable attention to indigenous issues.

“In many respects, initiatives related to the Sami people in the Nordic countries can set important examples for securing the rights of indigenous peoples,” she noted in a news release.

Nevertheless, the expert cautioned that “the challenges ahead in Sápmi remain significant, and to meet them will require serious commitment, political will, and hard work.”

This is especially true given the increased drive to extract and develop minerals and set up renewable energy projects in the Sápmi region.

“In the context of mineral extraction and large-scale renewable energy projects, such as windmills, particular attention should be paid to ensuring that the traditional livelihoods of the Sami, including reindeer herding and salmon fishing, are effectively safeguarded,” she stated.

The expert encouraged the three governments “to ensure that their mineral laws and policies are in line with international standards related to the rights of indigenous peoples, including those requiring adequate consultations with the affected indigenous communities and their free, prior and informed consent, mitigation measures, compensation and benefit sharing.”

In that context, she was pleased to learn of the commitment of the Swedish Government to revisit its mineral act.

With respect to Finland, Ms. Tauli-Corpuz was pleased to learn of the increased safeguards for Sami rights and livelihoods in the Mining Act, and hopes that Finland will continue to pay attention to the rights of the Sami in its implementation.

The Special Rapporteur emphasized in particular the cross-border efforts taken by the Sami Parliaments and the Governments of Norway, Sweden and Finland to develop a Nordic Sami Convention, which could be enshrined as a global best practice to implement the UN Convention on the Rights of Indigenous Peoples and the Outcome Document of the World Conference on Indigenous Peoples. “I encourage all parties involved to follow through on their commitment to adopt this Convention by March 2016.”

At the conference, held in Hemavan, Sweden, from 25 to 27 August, she also examined both progress and remaining gaps regarding other key issues affecting Sami people, including in the areas of education, language and mental health, as well as combatting violence against Sami women.

Ms. Tauli-Corpuz’s participation at the conference was considered an official visit to the traditional region of the Sami people, who continue to live within their territories spanning the formal boundaries of several States.

She will submit a report next year to the Geneva-based UN Human Rights Council with her conclusions and recommendations. 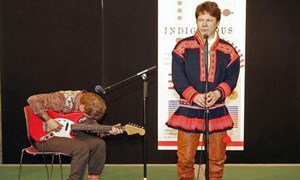 A United Nations expert urged Norway today to strongly reject the proposal by one of its parties to repeal key laws and policies designed to protect indigenous groups, saying its approval would represent an “enormous setback for the recognition and protection of human rights in the country.”