Somalia’s humanitarian situation remains “alarming” four years after a devastating famine with the number of people requiring emergency aid rising 17 per cent to more than 850,000 and those in “food-stressed” situations still at 2.3 million, according to the latest United Nations-managed food assessment study released today.

“The levels of food insecurity and malnutrition are critical,” said UN Humanitarian Coordinator for Somalia, Peter de Clercq. “Humanitarian actors and donors have prevented the situation being a lot worse than it is, but we all need to do more.”

In 2011, Somalia experienced a devastating famine, according to the UN Office for Coordination of Humanitarian Affairs (OCHA). Things have since improved, but humanitarian needs remain vast and the number of people in need of humanitarian assistance continues to fluctuate around 3 million. The ability to absorb shocks – whether conflict or natural disasters – is very limited.

According to the Food Security and Nutrition Assessment for Somalia managed by the UN Food and Agriculture Organization (FAO), “widespread acute malnutrition persists across Somalia and large numbers of people will be acutely food insecure through December 2015.”

The results of assessment presented today in the Somali capital of Mogadishu “indicate that the country’s humanitarian situation remains alarming,” OCHA said.

The latest findings from the joint countrywide seasonal assessment reveal that some 855,000 people across Somalia will be in ‘crisis and emergency’ through December 2015.

“This figure represents a 17 per cent increase over the estimate for February to June 2015,” according to the assessment, while the number of those in food-stressed situations remained at 2.3 million.

More than two thirds, or 68 per cent, of the people who are in crisis and emergency are internally displaced and nearly 215,000 children aged under five are acutely malnourished, of whom almost 40,000 are severely malnourished and face a high risk of disease and death.

“We must continue investing in saving lives. We cannot allow a reversal in the important steps forward made on the humanitarian and development fronts,” Mr. de Clercq said, “We must simultaneously address the underlying causes of the country’s predicament, and work on durable solutions that will mitigate suffering while also building a more resilient Somalia.” 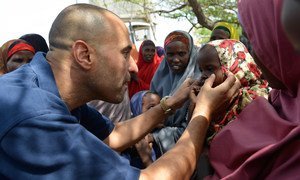 Somalia – a country where every two hours a mother dies due to pregnancy complications – is facing cuts in life-saving health services because of the lowest funding levels in seven years, according to the United Nations World Health Organization (WHO).