UNHCR/A. McConnell
A group of Afghans arrive on the island of Lesbos after travelling in an inflatable raft from Turkey to Greece. Hundreds of thousands of refugees and migrants used the dangerous sea route across the Mediterranean in 2015.
28 August 2015

The United Nations refugee agency said today that the number of refugees and migrants crossing the Mediterranean to reach Europe has surpassed 300,000 this year, up from 219,000 during the whole of 2014.

“Some 2,500 refugees and migrants are estimated to have died or gone missing this year while attempting the crossing to Europe – compared to 3,500 who died or went missing in the Mediterranean in 2014” said Melissa Fleming, spokesperson for the Office of the UN High Commissioner for Refugees (UNHCR), at a press briefing.

This number, which includes almost 200,000 people landing in Greece and 110,000 in Italy, represents a substantial increase from last year.

In a statement Secretary-General Ban Ki-moon said he has been horrified and heartbroken at the latest loss of lives of refugees and migrants in the Mediterranean and Europe.

He reminded the international community that a large majority of people undertaking these arduous and dangerous journeys are refugees fleeing from places such as Syria, Iraq and Afghanistan.

International law has stipulated – and states have long recognized – the right of refugees to protection and asylum. When considering asylum requests, States cannot make distinctions based on religion or other identity – nor can they force people to return to places from which they have fled if there is a well-founded fear of persecution or attack.

“This is not only a matter of international law; it is also our duty as human beings,” said the UN chief, and while he commended those leaders and communities that have “stepped,” he appealed to all governments involved to provide comprehensive responses, expand safe and legal channels of migration and act with humanity, compassion and in accordance with their international obligations.

“Let us also remember: the high number of refugees and migrants are a symptom of deeper problems – endless conflict, grave violations of human rights, tangible governance failures and harsh repression. The Syrian war, for example, has just been manifested on a roadside in the heart of Europe.”

Mr. Ban said that in addition to upholding responsibilities, the international community must also show greater determination in resolving conflicts and other problems that leave people little choice but to flee. Failing that, the numbers of those displaced – more than 40,000 per day – will only rise.

“This is a human tragedy that requires a determined collective political response. It is a crisis of solidarity, not a crisis of numbers,” the Secretary-General declared.

According to UNHCR, the Libyan Coast Guard carried out two rescue operations on Thursday morning, seven miles off the port town of Zwara. Two boats carrying approximately 500 refugees and migrants were intercepted and survivors taken to shore. With an estimated 200 people still missing – and feared dead – a still undetermined number of bodies were recovered and taken to shore. The Libyan Red Crescent has been helping with the collection of the bodies.

On Wednesday, a rubber dinghy carrying some 145 refugees and migrants ran into trouble when the operator tilted the skiff dangerously to one side. Panic followed as some people fell into the sea and two men jumped into to rescue them. Amidst jostling and shoving, three women on the dinghy were crushed to death. Of those who fell into the water, 18 remain missing and believed to have drowned.

According to UNHCR, the survivors were rescued and taken to Lampedusa, including the two-month old baby of one of the dead women. Most of the survivors are in critical condition, suffering from shock, cuts and bruises.

That same day rescuers aiding a boat off the Libyan coast found 51 people suffocated to death in the cargo hold. According to survivors, smugglers were charging people money for allowing them to come out in order to breathe.

Last week, in a similar incident, the bodies of 49 persons were found in the hold of another boat. They are thought to have died after inhaling poisonous fumes.

Despite the concerted efforts of the joint European search and rescue operation under FRONTEX (Frontières extérieures), which has saved tens of thousands of lives this year, the Mediterranean Sea continues to be the deadliest route for refugees and migrants.

While these numbers are overwhelming for the already overstretched capacity of single countries, such as Greece, the Former Yugoslav Republic of Macedonia, Hungary, Serbia or Germany, they are manageable through collaborative and coordinated responses at the European level.

All European countries and the European Union must act together in response to the growing emergency and demonstrate responsibility and solidarity.

“UNHCR appeals to all governments involved to provide comprehensive responses and act with humanity and in accordance with their international obligations,” Ms. Fleming concluded. 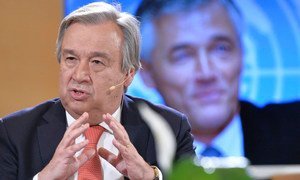 With the number of migrants fleeing to Europe the violence in their countries of origin continuing to increase, the United Nations High Commissioner for Refugees, António Guterres, today urged the European Union to speed up the formulation of an adequate collective response to this unprecedented crisis.