“We are extremely concerned by the mounting violence in Bambari and its impact on the civilian population. Our staff have reported the displacement of people who are extremely frightened,” Kouassi Lazare Etien, the Representative of the Office of the UN High Commissioner for Refugees (UNHCR) in CAR, said in a press release.

Mr. Etien said that the agency was also worried about hundreds of Sudanese refugees “trapped in a refugee camp [near Bambari] and at high risk of attacks.” The road leading to the camp had been inaccessible since the weekend, but a UNHCR team escorted by UN peacekeepers reached the Sudanese refugee camp on Wednesday.

“A spontaneous IDP [internally displaced persons] site had sprung up inside the Bambari compound of the UN peace-keeping force,” the UN Multidimensional Integrated Stabilization Mission in CAR (MINUSCA), according to the refugee agency.

UNHCR staff said the agency’s partner, the National Refugee Commission, had registered about 3,000 displaced persons in the MINUSCA compound as of Tuesday.

“But conditions are dire at the site, a former cotton factory with no sanitation facilities and limited access to water and shelter,” the agency said.

The situation began to ease on Thursday but UNHCR staff say Bambari remains very tense and they fear the situation could deteriorate again.

UNHCR is now able to move around Bambari and is trying to assess the total number of newly displaced. The tension remains with armed groups in control of the streets.

The population and aid workers were isolated and inaccessible, but a humanitarian corridor has been opened to the airport since Tuesday following negotiations between MINUSCA and the rival militia groups.

The latest flare-up in Bambari erupted after a 19-year-old Muslim was killed in the city and beheaded by alleged anti-Balaka fighters, according to the refugee agency. “This triggered violent reprisal attacks between the two communities in Bambari, which have left at least 10 people dead and many injured, including ICRC (International Committee of the Red Cross) staff,” it said. 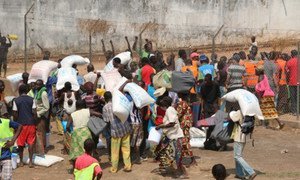 A senior United Nations relief official today strongly condemned the attack against humanitarian workers that occurred on August 20 in Bambari, in Central African Republic (CAR), and injured one staff from the Red Cross Movement.