OCHA/Pierre Peron
The market in the town of Bol on the outskirts of Lake Chad. Lack of clean water and health centres remain major concerns.
27 August 2015

A senior United Nations relief official today called on the international community to ramp up its support in response to the multifaceted humanitarian challenges affecting Chad, the seventh largest refugee-hosting country in the world.

“Now is the time for the aid community to scale up its support for humanitarian action, especially for people in the Lake Chad region,” where, “prior to this recent crisis, a quarter of the nation’s population needed humanitarian assistance,” advocated UN Regional Humanitarian for the Sahel, Toby Lanzer, at the end of a four-day visit to Chad and the Lake Chad Basin.

In the past few weeks alone, a press release reveals, the worsening security situation in the region forced over 41,000 persons to flee their homes on islands and relocate to safer areas inland.

“Communities witnessed unspeakable atrocities and violence. Entire families are uprooted and now face a very precarious humanitarian situation,” stressed Mr. Lanzer. “Many fled without anything but the clothes on their backs. People do not have access to sufficient potable water or food, are highly vulnerable to diseases, and sleeping under trees.”

The ongoing crisis has put additional pressure on the already stretched resources and livelihoods of both those displaced and the communities that host them. Insecurity is preventing many farmers from accessing their lands on the eve of the harvest season, which represents a lifeline for local communities.

“Some people had to flee their homes a couple of weeks after having planted their crops. The closure of the border between Chad and Nigeria is impeding trade and disrupting ancestral migration routes for herders and cattle. Fishermen too, are deprived of their livelihoods”, Mr. Lanzer continued. “The food security of many families is seriously compromised, much more than usual at this time of the year.”

Humanitarian teams on the ground are supporting Chadian authorities to respond to crucial needs in the Lake Chad basin. However, the volatile security situation and the population movements are challenging the ongoing efforts. In addition to assisting the newly displaced persons who are scattered across over twenty informal settlements and staying with host communities, humanitarian teams must also meet the needs of over 34,000 recently arrived people.

Only 35 per cent of this year’s humanitarian appeal for Chad – a total amount of $572 million – has been covered so far. “Without urgent additional financial support, the humanitarian situation in Chad is at risk of seriously deteriorating”, the Coordinator warned.

Over 750,000 displaced persons live in Chad, the majority being refugees or Chadian returnees who fled from the Central African Republic, Libya, Nigeria, and Sudan. Food insecurity affects some 2.4 million people and 350,000 children under five year are at risk of acute malnutrition. The country also has high prevalence rates of malaria, cholera or measles, while maternal mortality rates are among the highest in the world. In addition, Chad is hit by natural disasters, such as droughts and floods. 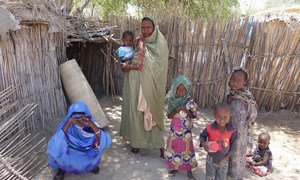 The United Nations today reported further population displacement in the Lake Chad region owing to fear of attacks by Boko Haram and appeals by the Government of Chad for civilians to leave areas where ongoing military operations are being undertaken against the group.