WHO/M. Harris
Adama Sankoh, who is the last Ebola case in Sierra Leone so far, was released from the Makheni Ebola treatment unit on 24 August 2015.
26 August 2015

Sierra Leone today began its countdown to be declared by the World Health Organization as free of Ebola virus transmission as the West African nation’s President described the release of the last patient treated for the disease at a treatment centre as “the beginning of the end of Ebola.”

“For first time in more than a year, there are no people being treated for Ebola virus disease and no confirmed cases of Ebola in the country,” WHO reported, but noted that President Ernest Bai Koroma reminded the nation that Ebola transmission would not be considered ended in Sierra Leone “until the WHO declares we have gone 42 days with no case.”

The 42-day period began on Tuesday.

In its latest update on Ebola released today, the UN health agency reported 3 confirmed cases of in the week to 23 August, all of which were reported from Guinea.

WHO confirmed that no new confirmed cases were reported from Sierra Leone for the second consecutive week.

Dr Anders Nordström, WHO Representative in Sierra Leone “the hard work that got Sierra Leone to this point has to continue.”

“Surveillance, searching for cases, notifying any deaths in the community, testing anyone with Ebola symptoms, all must continue intensively,” Dr. Nordström said. “And the community involvement that has led us to this point must continue as well.”

No new cases were reported from Liberia as well. All contacts in Liberia have now completed their 21-day follow-up period. 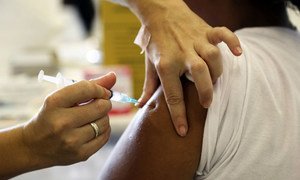 With one in five children still not receiving routine life-saving immunizations, and an estimated 1.5 million dying each year of diseases that could be prevented by vaccines, people who delay or refuse vaccines for themselves or their children are presenting a growing challenge for countries seeking to close the immunization gap, according to the United Nations World Health Organization (WHO).