With the United Nations-supported political dialogue process in Libya nearing its last stages, “time is running out” for leaders on all sides and at all levels to make the “final push,” the head of the UN Mission in the country (UNSMIL) told the Security Council today.

“Overcoming the political polarization and divisiveness in Libya will be no easy task…the onus is on Libya’s leaders on all sides, and at all levels, to make that final push towards peace,” said Bernardino León, who is also the Special Representative of the Secretary-General for the North African country.

Briefing to the 15-member Council body via videoconference from Paris, he said the magnitude of the challenges should not be underestimated, nor of the resources required to pull the country back from the brink of economic meltdown and total collapse of State institutions.

“It will be the determination and commitment of Libyans themselves, more specifically their political leaders, which will safeguard the country. The international community must move quickly to present a clearly articulated strategy in support of the Libyan State,” Mr. León declared.

Outlining the details of the Secretary-General’s latest report, which “paints a mixed picture of the evolving security dynamics in Libya,” Mr. León said that while the situation in western Libya had witnessed a marked reduction in military tensions, this stood in stark contrast to security dynamics elsewhere in the country.

Fifteen months since the start of military operations in Benghazi, confrontations has gradually transformed into “war of trenches” with no immediate end foreseen. The situation in the south is equally appalling, where the absence of the State and of a properly functioning security apparatus has exacerbated competition among rival groups for power and resources.

At the national level, the scale of human suffering is staggering for a country with large oil reserves and strong economic potential, Mr. León said. An estimated 1.9 million people require urgent assistance to meet their basic health-care needs, and access to food is a major problem for 1.2 million people. Close to 250,000 migrants are estimated to be in or transiting through the country, many of them facing significant protection issues.

“This year alone has seen more than 2,000 migrants drown in the Mediterranean Sea, the vast majority in a desperate bid to reach Europe,” he explained.

Since he last briefed the Council in mid-July, Mr. León said, the Islamic State in Iraq and the Levant/Sham (ISIL), or Da’esh, has extended to a 200-kilometre stretch of coastline east and west of Sirte. Libyan stakeholders must recognize that no strategy aimed at containing, if not eliminating, the Da’esh threat would be viable unless it was part of a concerted, unified and coordinated effort that brought all Libyans together under a single banner.

To that end, he reconvened political talks in Geneva on 11 and 12 August focusing on ways of expediting dialogue ahead of the 21 October deadline, when the mandate of the House of Representatives would end. Although the General National Congress in Tripoli did not initial the main text of the Libyan Political Agreement along with other dialogue participants on 11 July, he is confident that their concerns could be addressed in the ongoing discussions on the annexes.

Seven months since the Mission launched the political dialogue process, the talks had come a long way in narrowing the trust deficit that existed among the country’s political stakeholders and in forging agreement on a road map to end the country’s political crisis and military conflict, Mr. León said. He called on Libyan leaders not to “squander the historic and unique opportunity they have before them to be peacemakers”. The Agreement may not be perfect, but it was a fair and reasonable one in which “the only winners are the Libyan people,” he said. 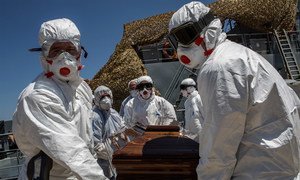 Following a spate of deadly shipwrecks of the coast of Libya, the UN refugee agency has announced that it has set up a forum to improve the country’s response to boats in distress its waters by streamlining information sharing and coordination with international organizations.