As momentum builds for December climate talks in Paris, Ban looks ahead to ‘bold’ outcome

Commending France’s “exemplary leadership” on efforts to tackle climate change, United Nations Secretary-General Ban Ki-moon today affirmed that the international community is now at a stage where the final elements of the new climate agreement are being negotiated.

“The climate conference in Paris later this year is at the very top of the international agenda. I expect a bold and meaningful outcome at the Conference of Parties…in December,” stated the UN Secretary-General Ban Ki-moon in his remarks to the French diplomatic corps, which has been meeting this week in Paris.

“I was especially glad to be invited to attend your gathering this year because of the historic efforts that are under way to chart a new development path for the human family,” Mr. Ban continued, adding that the climate negotiations cap a “transformational” year for human progress.

In March, he underlined, the Third UN World Conference on Disaster Risk Reduction in Sendai, Japan, agreed on important steps to build more resilient societies, while in July, the Third International Conference on Financing for Development, in Addis Ababa, revitalized the global partnership for development.

“And earlier this month, in New York, Member States agreed on the final text of an inspiring new development agenda that will guide us through to the year 2030,” he also mentioned, rejoicing that world leaders will formally adopt it next month. 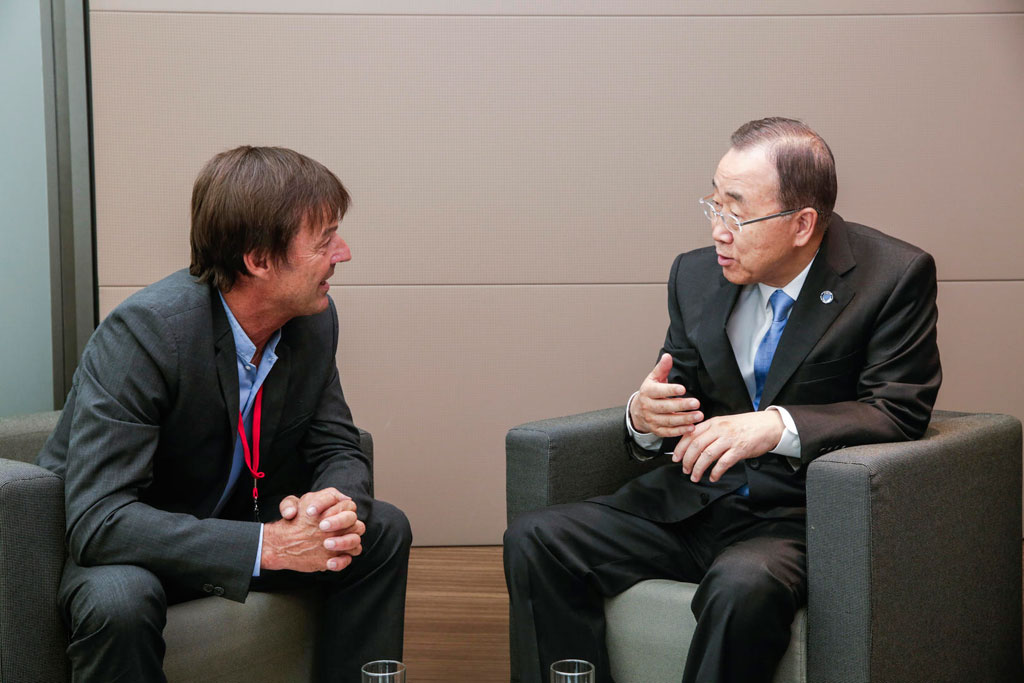 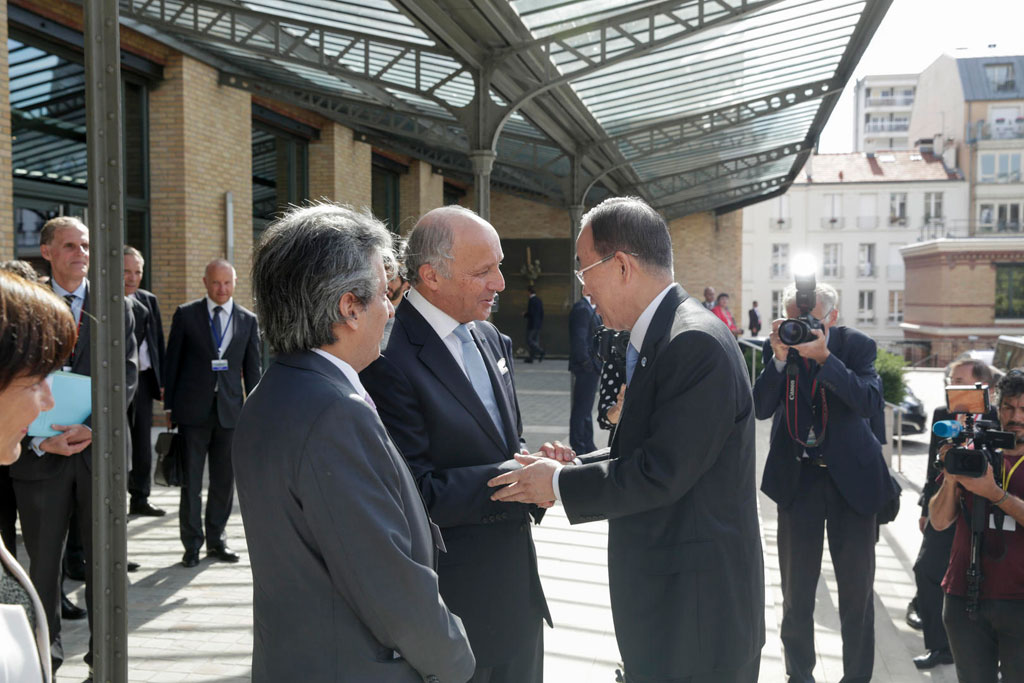 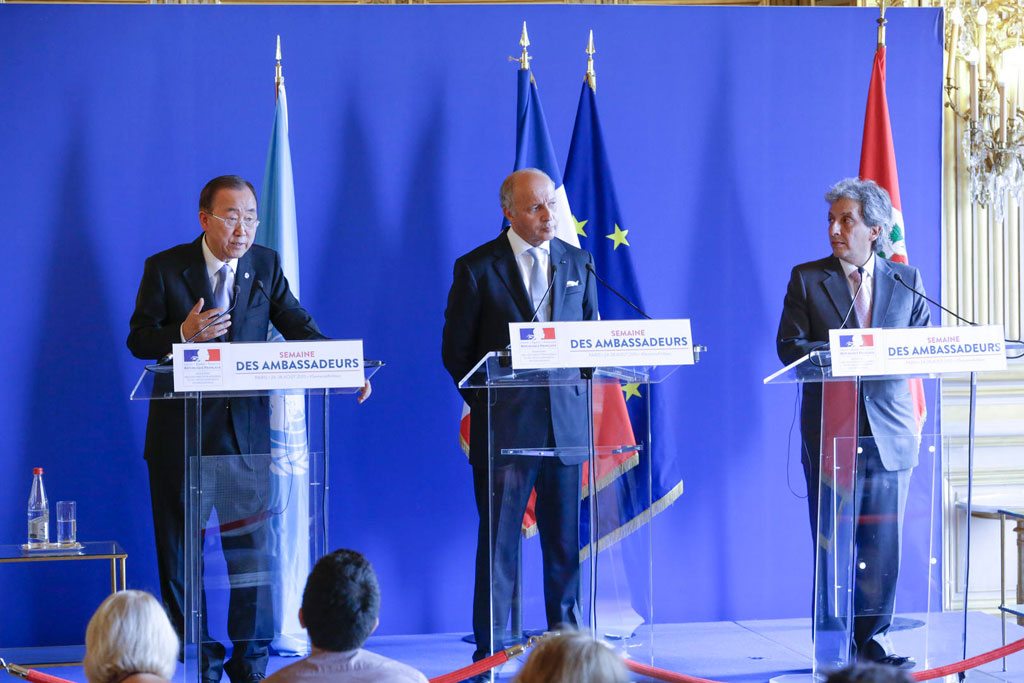 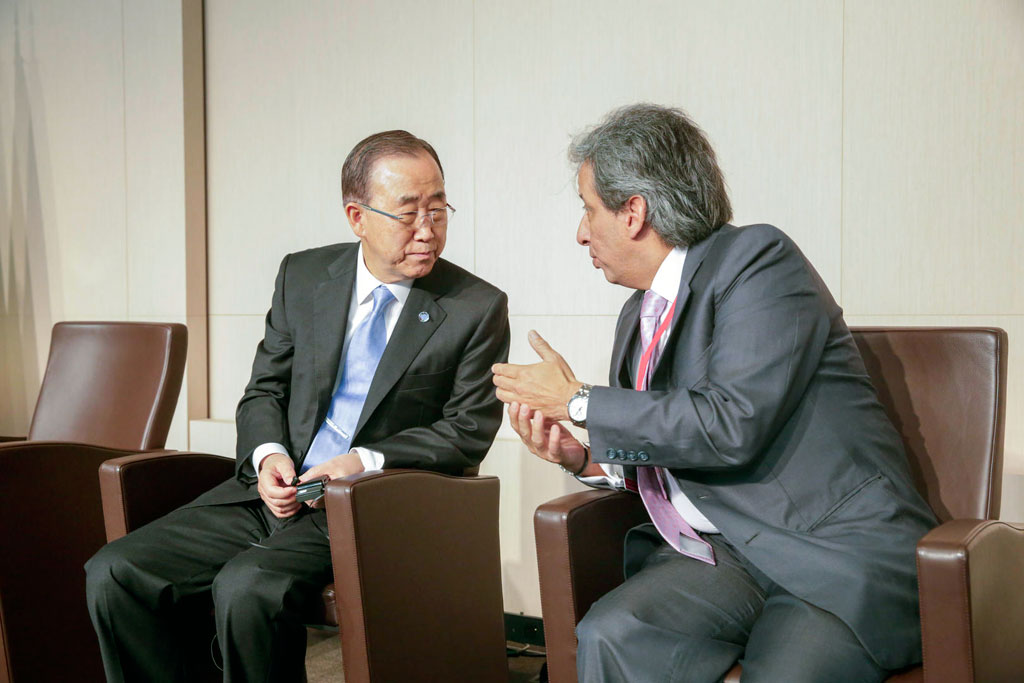 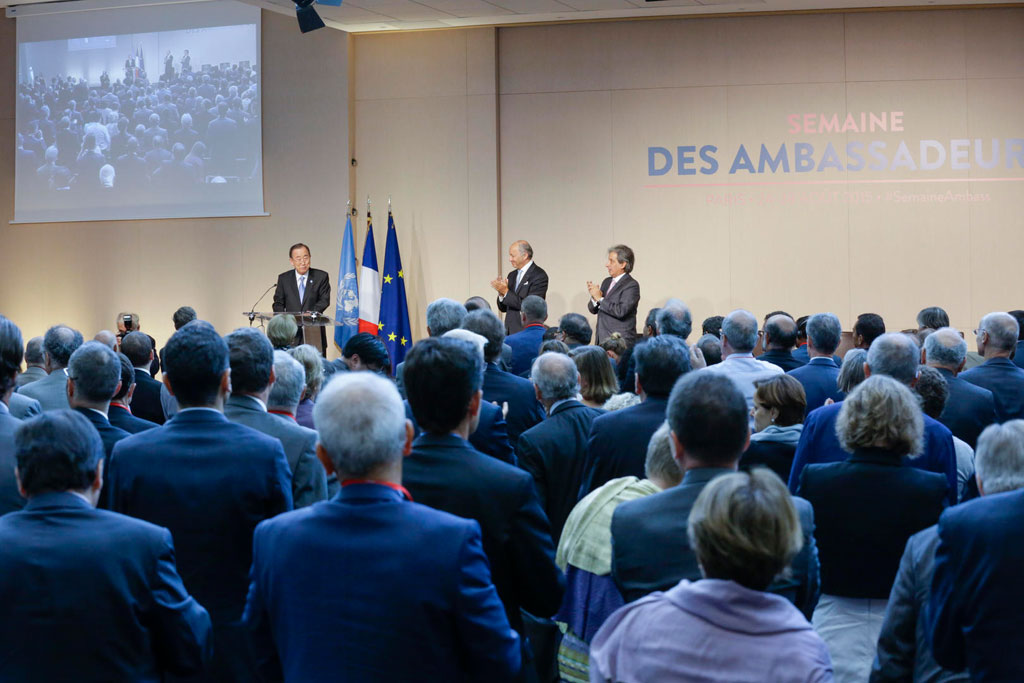 Secretary-General Ban Ki-moon receives a standing ovation after his speech at the Conference of Ambassadors. UN Photo/Evan Schneider

Calling the 17 adopted Sustainable Development Goals a “path to sustainable development,” the Secretary-General said they offered a “blueprint” for ending poverty in all its dimensions “without leaving anyone behind” and identified the fundamental links between promoting prosperity and ensuring peaceful societies and respect for human rights.

But unless the world takes urgent action on climate change, sustainable development will not be achieved, he warned. “In my engagement with leaders, I have made it clear what I believe a meaningful [climate] agreement could include,” referring to the expected outcome of the 21st meeting of the parties to the UN Framework Convention on Climate Change (UNFCCC), widely referred to as COP-21.

First, Mr. Ban noted, it must send a strong signal that the world is committed to a low-carbon future, “and there is no going back.”

Second, he continued, an agreement must be durable so that it provides the private sector with the predictability and policy frameworks it needs to invest in clean energy and climate-resilient approaches.

“Third, it must be flexible so that it can provide incentives and incorporate more ambitious, science-based nationally determined targets over time,” the Secretary-General recommended.

Fourth, it must uphold the principle of equity, support the adaptation needs of developing countries, and demonstrate solidarity with the needs of the poorest and most vulnerable countries.

Fifth, it must include credible, clear mechanisms for measuring, monitoring and reporting progress in a transparent manner on a full range of actions, Mr. Ban went on to say.

And sixth, credible climate financing is essential, he stressed, recalling it is “imperative” that developed countries provide greater clarity on the public finance component of the $100 billion before the Paris conference, as well as on how they will engage private finance.

The UN chief therefore is engaging with leaders “from north and south” to make sure this goal is met and is considered credible by all.

An agreement must also acknowledge the need for long-term, very significant financing beyond 2020, and the Green Climate Fund must be up and running, with funds that can be disbursed before Paris, he emphasized in conclusion, encouraging countries and companies to “take the lead” in developing clean energy technologies and markets.

The Secretary-General also had today a “very productive meeting” with French Foreign Minister Laurent Fabius, with whom he discussed a number of global challenges with national and continental implications, including migrations.

“More people are displaced today than at any time since the Second World War. Many millions are fleeing violence and persecution in Syria and elsewhere. Others are seeking to escape poverty and looking for opportunities to lead a dignified life. They are making perilous journeys and should not face yet another ordeal upon arrival,” he said, welcoming countries that are showing solidarity.

Violent extremism is another major area of concern, the UN chief added. “As we saw with the recent potential mass attack here in France, we must be vigilant in addressing threats without ever becoming overcome by fear and suspicion, which is precisely the intent of those who seek to terrorize.” 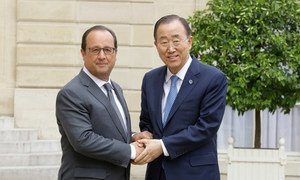 In Paris today, United Nations Secretary-General Ban Ki-moon met with the President of France, François Hollande, with whom he discussed a range of issues, including the climate change conference, which is due to start in December (COP-21) in the French capital, as well as the next steps to be taken to ensure an ambitious outcome.