UNICEF/Mohammad Badrul Hassan
Chin State, remote and mountainous and one of the poorest regions in Myanmar, was among the hardest-hit by floods in 2015.
26 August 2015

The United Nations World Food Programme (WFP) is now delivering rice, beans, cooking oil and salt to more than 400,000 people affected by flooding in Myanmar and “reachable only on foot, after floods and landslides destroyed roads across the country,” the agency said today.

More than 1.7 million people in Myanmar have been affected by widespread flooding and landslides as a result of heavy monsoon rains since early August.

In a press release issued in Yangon, Myanmar, WFP said it is appealing for $12.3 million urgently required to meet flood needs.

Emergency relief efforts began earlier this month within 48 hours of the President’s declaration of a state of natural disaster, WFP said, adding that with the provision of free transport by the Government and local airlines, more than 2,500 metric tons of food has been delivered to the flood-affected areas so far.

“WFP has supported the Government of Myanmar to save lives with emergency food, including supporting many who are reachable only on foot, after floods and landslides destroyed roads across the country,” according to WFP Country Director Dom Scalpelli. “It is quite an achievement, and I would like to thank our funding and cooperating partners for their support.”

WFP, working with the Government, other UN organizations and non-governmental organizations (NGOs), aims to have reached more than 440,000 people with food assistance by the beginning of September.

People affected by the flooding receive a one-month ration of rice, pulses, cooking oil, and salt. In some cases, they also receive a week’s supply of high-energy biscuits, the agency said.

The emergency has forced WFP to temporarily suspend regular programmes such as school feeding nutrition assistance for pregnant women and nursing mothers, and the provision of food for people living with HIV and tuberculosis. 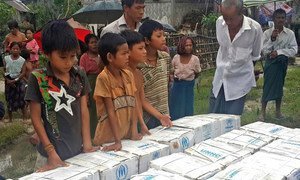 Just back from Myanmar’s flood-hit Sagaing Region, the United Nations Humanitarian Coordinator for the country, Renata Dessallien, described today the devastation she witnessed, saying she had been “humbled by the incredible, spontaneous public outpouring of solidarity and assistance to flood-affected communities.”