UNICEF/Razan Rashidi
In the Tishreen camp for displaced persons in Aleppo, Syria, a boy carries a jerrycan he filled at a water tank built by OXFAM with UNICEF support.
26 August 2015

Amid the unremitting brutality of the war in Syria and a scorching summer heat wave, there is increasing evidence that parties to the conflict are using water to achieve military and political gains, warned the United Nations Children’s Fund (UNICEF).

“Clean water is both a basic need and a fundamental right, in Syria as it is anywhere else,” reminded Dr. Peter Salama, UNICEF Regional Director for the Middle East and North Africa in a press release. “Denying civilians access to water is a flagrant violation of the laws of war and must end.”

In recent months, up to five million people living in cities and communities across the country indeed have suffered the consequences of long and sometimes deliberate interruptions to their water supplies. That includes 2.3 million in Aleppo, 2.5 million in Damascus and 250,000 in Dera’a.

In the northern city of Aleppo, where fighting has crippled the main pumping station for months at a time, UNICEF has recorded 18 deliberate water cuts this year alone. Taps in some communities were left dry for up to 17 days in a row – and for over a month in some areas of the city.

With no water at home, children often take on the task of collecting water from street standpipes and collection points. One UNICEF engineer tells of a little girl he met who had stood in line for hours to fill two small water containers, only to realize that they were too heavy for her to carry. “She just burst into tears,” he recalled.

The unpredictability of warfare can make the process of fetching water dangerous, and even lethal, UNICEF underlined. In recent weeks, conflict cost the lives of at least three children while they were out collecting water in Aleppo.

Water shortages bring other consequences as well. Families in Damascus, Dera’a, Aleppo and other areas have to rely on dirty water from unregulated and unprotected groundwater sources, exposing children in particular to the risk of contracting diarrhoea, typhoid, hepatitis, and other diseases. In recent weeks, water prices have increased in Aleppo by up to 3,000 per cent, at a time when families are finding it harder than ever to make ends meet.

Syria’s water crisis has deepened along with the conflict; water availability is about half what it was before the crisis began in 2011. Ongoing violence and heavy clashes have caused severe damage to pipelines and other water infrastructure, and municipal workers are often unable to carry out the necessary repairs.

Frequent power cuts make it hard for technicians and engineers to pump water to civilians. Some areas receive only one hour of electricity a day and cuts lasting up to four days are reported. The misery is particularly acute for millions of displaced families who have to share limited water supplies in over-crowded shelters.

To add to the suffering, Syria – like much of the region – has been wilting under a heat wave said to be the harshest in decades. Temperatures in Aleppo have soared to above 40 degrees Celsius in recent weeks.

UNICEF called on parties to the conflict to take urgent steps to avert further suffering of civilians in Syria, by immediately halt water cuts and all actions that interrupt public water supplies, end all attacks on water facilities and infrastructure, and protect the safety of water engineers and other personnel who repair water supply installations. 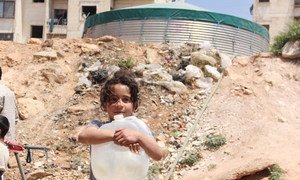 The restoration of water supplies to the war-torn Syrian city of Aleppo has come as a welcome relief to residents whose taps have run dry in recent weeks due to the fighting and frequent power cuts, the United Nations Children’s Fund (UNICEF) said today, as it stepped up efforts to assist the local population.