FAO
The impact of climate change is affecting Lesotho’s progress towards development in a number of areas, including agriculture, food security, water resources, public health and disaster risk management.
25 August 2015

The climate change agreement world leaders are expected to sign in December “has to take us to a less than 2 degree global warming path because that is the ultimate test of the whole package that will come out of Paris,” according to Janos Pasztor, a senior United Nations official dealing with the issue.

“Our expectation is that there will be a good agreement signed,” Mr. Pasztor said in an interview with the UN News Service ahead of Secretary-General Ban Ki-moon's meeting today in Paris with French President François Hollande to discuss the latest developments in the lead up to the Conference of States Parties to the UN Framework Convention on Climate Change, known as COP-21, as well as the next steps to be taken to ensure an ambitious outcome.

The UN official elaborated on the expected outcome in Paris by saying that “there has to be something that is there for the long term so that there is a clear signal that is provided to the market and to other actors that we are going in a certain direction of increasingly low carbon development.”

“It also has to have dimension of solidarity – solidarity with those who are more vulnerable, and those who are less capable of taken action on their own without financial and technological support,” he said.

“And finally, what is perhaps most important, it has to take us to a less than 2 degree global warming path because that is the ultimate test of the whole package that will come out of Paris,” he said.

In this regard, Secretary-General Ban and President Hollande in Paris noted the importance of, and different ways of engaging Heads of State and Governments on climate change, including on the margins of the 70th session of the UN General Assembly in New York in September as well as at other meetings involving global leaders.

They also agreed on the importance of generating signals about the climate finance package for COP-21 as early as possible, such as at the meeting of Finance Ministers in Lima in October. In addition, the two men agreed on the importance of operationalizing the Green Climate Fund, and of reaching out to all Member States to further accelerate momentum in the coming months.

In his interview, the senior official said he had been up in the Arctic with the Secretary-General recently “where already they are measuring 2 degree warming over the baseline which is twice the global average.”

Mr. Pasztor said “you see the impact” everywhere, but he also drew attention to “a lot of incredible solutions especially when it comes to renewable energy.”

“If you see what has happened in Denmark and Germany and China, in different parts of the world, it just really amazing,” he said.

On another positive note, Mr. Pasztor said that “everybody has a role to play” to combat climate change.

“Everybody can do something,” he said, adding “If everybody in the world does something we would have solved the climate change problem.” 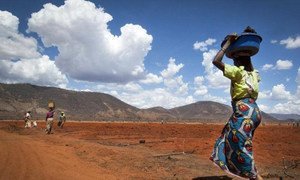