Voicing concern over continuing political violence and killing of protestors in Nepal, the United Nations human rights office today called on the authorities to respect dissenting voices and seek a peaceful solution with demonstrators.

“The rights to freedom of expression, association and assembly are essential elements in the promotion of democracy and human rights,” Rupert Colville, spokesperson for the Office of the UN High Commissioner for Human Rights (OHCHR), told reporters in Geneva.

Seven members of the security forces and three protestors were reportedly killed yesterday, as well as the two year-old son of one deceased police officer, according to OHCHR.

“We are concerned by reports from Nepal of continuing political violence,” said Mr. Colville, adding that the recent incident was in addition to the deaths of five protestors during widespread demonstrations following an 8 August agreement by political parties on redrawing internal state boundaries.

However, increasingly violent protests against the proposed delineation have taken place throughout the country since the agreement was reached.

“There is a clear risk that the protests and violence will continue to feed off each other in the coming days unless all sides change their approach,” said Mr. Colville.

While urging the Government to create a climate where minority or dissenting views are respected, the human rights office said that security forces should only employ force as a last resort and in full accordance with the standards laid out under international law for maintaining public order, including detailed guidelines governing the use of live ammunition.

“We urge political leaders and protestors to sit down together to find a peaceful solution to the current situation before the rising violence spirals out of control,” said Mr. Colville, also stressing that protests should be carried out in a peaceful manner and not pursue violent confrontations with the security services.

The UN rights office further reckoned the call of the Nepal National Human Rights Commission for an independent, thorough and impartial investigation into all deaths and injuries resulting from the alleged use of disproportionate force by security personnel, as well as into the deaths of the seven security personnel killed on Monday.

The agreement, after extended negotiations, aims to draw up a new constitution further to the Comprehensive Peace Agreement that ended the 10-year internal conflict in 2006. 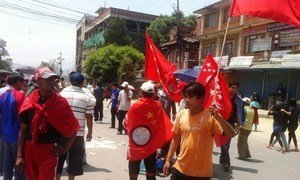 Secretary-General Ban Ki-moon has welcomed the agreement of a new constitution for Nepal as “a major milestone” in the country's democratic development, a spokesperson for the United Nations confirmed today.