The United Nations Relief and Works Agency for Palestine Refugees in the Near East (UNRWA) called today for restraint in the wake of 24 August clashes between various armed groups that have seriously impacted the refugee community in southern Lebanon’s Ein el Hilweh Camp in Saida.

“We are deeply concerned over reports that civilians are endangered and that our installations have been directly affected by the fighting,” said UNRWA Spokesperson Chris Gunness in a statement. “UNRWA condemns any armed group that fails to respect its obligations under international law to protect civilians and to respect the inviolability of United Nations premises.”

With the possibility of some 3,000 people displaced, the UN agency has been unable to confirm fatality or casualty figures – but called for the prevention of further deterioration.

Mr. Gunness said that heavy fighting has been reported in the vicinity of a number of UNRWA installations, including schools and health clinics. Residents are reportedly vacating the camp and have taken refuge at various locations, mainly in Saida municipality and Mieh Mieh camp, but also elsewhere in Lebanon.

“UNRWA calls on all parties to respect the neutrality of the UN and its installations, to desist from conducting armed hostilities in residential areas and to allow its resumption of services,” he said.

The UN agency’s lack of full access to and movement in and around Ein el Hilweh camp restricts its ability to deliver essential services. However, UNRWA has mobilized its humanitarian response and, coordinating with partners, is helping to support displaced people – including by providing food, medical assistance and shelter.

“UNRWA will continue to monitor the situation as it evolves and provide assistance.” concluded Mr. Gunness. 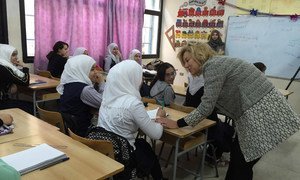 On a visit to the Palestinian refugee camp of Ein El-Hilweh in south Lebanon today, the United Nations’ top official in the country said the world body would continue working to assist where possible and would seek critical support from donors.