“In Taiz, the ongoing crisis has led to the closure of many health facilities and access to health facilities for the injured civilians and doctors is almost becoming impossible; shortages of basic and lifesaving medicines, medical supplies, laboratory reagents in the health facilities are fast dwindling with limited access for replenishing,” said Dr. Ahmed Shadoul, the UN World Health Organization (WHO) Representative for Yemen.

In response to the growing humanitarian crisis in Tiaz and Hodeida governorates and the rising number of civilian injuries in the southern governorates of Yemen, WHO is coordinating a rapid response to provide emergency health access to the injured, internally displaced persons and host communities.

But to date, the response to the escalating needs to support life-saving health interventions has been inadequate.

WHO requires $105 to cover the health needs of 10.3 million people, however the agency has only received $19 million (18 per cent) leaving a funding gap of 82 per cent.

In a press release issued in the Yemeni capital, Sana’a, WHO said thousands of people have been injured in Taiz since the start of March 2015 with over 350 casualties recorded in the last one week alone.

Over the weekend, WHO donated 2 trauma kits sufficient to conduct 1,000 surgeries, one surgical supply kit, 15 dressing kits, 40 first aid bags and anaesthesia to treat the increasing numbers of injured patients in Tiaz.

And in Hodeida governorate and Tehama region, where the crisis has equally escalated, WHO has donated emergency trauma kits and other medical supplies sufficient to treat over 4,500 patients at a hospital and a renal dialysis centre to address immediate health needs. Shortly after the delivery of the supplies to the hospital, 25 major surgeries were carried out as a lifesaving intervention.

“WHO is committed to ensuring that all Yemenis continue to have access to health services, including those in the hardest to access areas through the provision of emergency lifesaving medicines, trauma kits, interagency emergency health kits, diarrhoeal disease kits and blood bank supplies which currently are urgently needed,” the WHO representative said.

But in the coming month, the health situation is expected to deteriorate further among the displaced people and host communities due to the continued crisis and escalating needs. 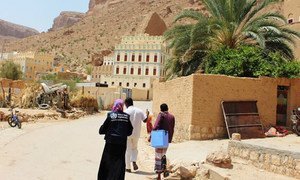 Nearly a quarter of all health facilities in Yemen are no longer operating fully – with more expected to close down in the coming weeks – resulting in “catastrophic consequences” for patients suffering from chronic kidney failure who are dependent on life-saving support, the World Health Organization (WHO) has warned.