Teaching history of slave trade can reinforce rights of all peoples, UN declares on Day of Remembrance

By teaching, communicating and transmitting the history of the slave trade the world can reinforce the rights and the dignity of people of African descent and, together, fight against all forms of racism and discrimination, the head of the United Nations Educational, Scientific and Cultural Organization said on the International Day for the Remembrance of the Slave Trade and its Abolition.

“The crime of slavery has forged irreversible bonds between peoples and continents, and reminds all peoples of the world that their destinies are linked, because their histories and identities were partly made across the seas, sometimes even on other continents,” declared Irina Bokova in her message on the Day, which is marked annual on 23 August and this year coincides with the beginning of the International Decade for People of African Descent (2015-2024).

The history of the slave trade is that of a battle, and eventually a victory, for freedom and human rights, symbolized by the uprising of the slaves of Santo Domingo on the night of 22 to 23 August 1791, she continued, noting that this message and the spirit of the Day, dovetailed with the Decade's goal to promote knowledge of and respect for the contribution of people of African descent to cultural diversity and the development of societies.

“Through its Slave Route Project and General History of Africa, continued Ms. Bokova, UNESCO is striving to reveal the reality of slavery and the slave trade to help all people to learn from this chapter of history.

And indeed, the International Day for the Remembrance is both a tribute to every victim and their resistance against slavery and a call for truth, justice and dialogue between peoples.

Moreover, faced with the permanent dangers of racism and extremism, UNESCO is taking action to ensure that memory and history be forces for dialogue, tolerance and mutual understanding. “By promoting the diversity inherent in nations, through the experience of slavery and the slave trade, we can better understand the world's diversity and find the road to peace,” she said. 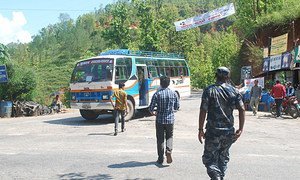 Secretary-General Ban Ki-moon today urged every country to join the fight against human trafficking as United Nations agencies and their partners vowed to work together to support and protect victims of this transnational crime, while pursuing and prosecuting criminals and their networks.