The enormous strides already taken by Kosovo and Serbia through the European Union-facilitated dialogue demand continuing commitment from both the parties and the international community, the United Nations Security Council was told today.

“Reaching equitable compromises, those which overcome legacies from the conflict and produce tangible benefit to both sides, is not limited only to the terms of the First Agreement reached on 19 April 2013,” said Farid Zarif, addressing the 15-member Council for the last time in his capacity as head of the UN Interim Administration Mission in Kosovo (UNMIK).

On 25 August, the top leaders from each side will meet once again, seeking accord on issues where differences, while narrowed, still remain.

“During the coming days, it is my hope that the dialogue will expand to include other difficult issues, which continue to burden relations,” he explained, citing the fate of missing persons and compensations for their families; the revitalisation of transport and commercial links; the complex issues surrounding property; and the return and settlement of refugees and internally displaced persons; as well as the status of the Orthodox Church.

Briefing the Council about the situation in Kosovo over the last three months, Mr. Zarif started by commending the critically important step taken its institutions in August, when the Assembly passed the requisite constitutional amendment and the laws on the establishment of the Specialist Chambers and Specialist Prosecutor's Office. Marking progress on the judiciary, these legislative acts fully accord with Kosovo and the European Union’s agreement, he noted.

If delays in finalizing the required framework had become a subject of serious concern, stressed the Special Representative, “the passage of the necessary normative acts and their promulgation yesterday by President Jahjaga, stands as a sign of Kosovo’s increasing determination to meet its fundamental obligations and commitments, which imply full respect for the rule of law and impartial justice; as well as accountability and equality before the law.”

One of the challenges Kosovo is facing is the legal protection of cultural and religious heritage sites. “Respect, protection and preservation of the Serbian Orthodox cultural heritage in Kosovo are fundamental duties, and also test of the responsibility of Kosovo’s governing institutions,” underlined Mr. Zarif.

Should these fail, he warned, many other important functions and responsibilities may equally fall into question. “It is, therefore, a matter of the utmost importance that the legal framework of protection, enshrined in the constitution of Kosovo, is adhered to with conscientious rigor.”

In that regard, Mr. Zarif, who is also the Special Representative of the Secretary-General, commended the firm assurances given to him by Prime Minister Isa Mustafa that a revised version of the draft Law on Cultural Heritage will not be approved by the Cabinet and submitted to the Assembly unless it fully conforms with the relevant provisions of the Constitution.

“When I arrived to Kosovo, soon after the events of July 2011, tension was extremely high on the ground. Four years on from that time, the situation differs dramatically,” Mr. Zarif reflected.

“No progress is irreversible, of course. I do not wish to suggest that the efforts made to date are yet sufficient to guarantee headway. I do, however, firmly believe that there is objective justification for cautious optimism that this process will continue and produce more tangible results in the interest of all.” 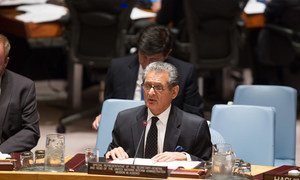 Serbia and Kosovo must not squander chance to overcome challenges, Security Council told

As Serbia and Kosovo aim to overcome the legacy of conflict, the two countries must avoid procrastination on implementing the remaining steps of the April 2013 Accord and allowing older issues to shackle opportunities to open new ground, the United Nations Security Council was told today.