WHO Yemen
Immunization teams are continuing efforts, during the national polio, measles and rubella campaign, to ensure that all targeted children in Yemen are vaccinated.
21 August 2015

Nearly a quarter of all health facilities in Yemen are no longer operating fully – with more expected to close down in the coming weeks – resulting in “catastrophic consequences” for patients suffering from chronic kidney failure who are dependent on life-saving support, the World Health Organization (WHO) has warned.

“The departure of health professionals fleeing violence has led to shortages of qualified health workers, creating a gap in the provision of primary health care, trauma and surgical care, as well as obstetric care,” WHO said in a press release issued Thursday in Sana’a, the Yemeni capital. “Further exacerbating the situation are shortages of power and fuel which have resulted in the closure of intensive care units and operation rooms in almost all hospitals across the country.”

Against this backdrop, however, WHO announced it has managed to vaccinate more than 3.9 million children under 5 years against polio in a national wide campaign launched on 15 August and an more than 860,000 other children aged 6 month to 15 years against measles in high-risk areas.

“Despite these achievements, we are only touching the tip of the iceberg in terms of our response,” said Dr. Ahmed Shadoul, WHO Representative for Yemen. “Millions of people are in urgent need of health care services and thousands more could lose their lives – not as a result of the violence, but as a result of limited funding impeding our ability to reach affected populations.”

More than15.2 million people are in need of health services life-saving assistance in Yemen, according to the agency, and the 1.4 million on the move, the “massive” population movement has overstretched functioning health facilities in areas hosting the displaced, increasing the risk of vaccine-preventable and waterborne diseases.

More than 2.6 million children under 15 years of age are at risk of measles and another 2.5 million under 5 at risk of diarrhoeal disease and acute respiratory infections, WHO said.

“Almost 23 per cent of all health facilities in Yemen are currently non-functional or partially functional as a direct result of ongoing violence, and additional facilities continue to close down week by week,” the agency said.

Most recently, the renal dialysis centre in Haradh governorate was forced to close due to increased violence and insecurity in the area preventing staff and patients from accessing the facility.

‘The centre’s closure could have catastrophic consequences for chronic renal failure patients who are dependent on its live-saving support,” according to WHO.

WHO has also trained and deployed over 50 mobile medical teams and 20 fixed medical teams in 11 governorates to provide an integrated primary health care package, and provided fuel to support the operation of 72 health facilities.

To reduce the risk of water-borne diseases, WHO has provided safe drinking water, hygiene supplies and cleaning materials to displaced populations in all affected governorates.

Out of $151 million required to meet the health needs of internally displaced persons in Yemen until the end of 2015, only $23 million has been received, leaving a funding gap of 85 per cent.

“If WHO does not receive much needed funds in the next coming months, more critical health care services will be forced to shut down,” the agency warned.

The top UN humanitarian official told the Security Council on Thursday that the scale of human suffering is nearly incomprehensible, and that unless stakeholders get the parties to stop the fighting and return to the negotiating table, soon “there will be nothing left to fight for.”

“The civilian population is bearing the brunt of the conflict – a shocking four out of five Yemenis require humanitarian assistance and nearly 1.5 million people are internally displaced. More than 1,000 children have been killed or injured and the number of young people recruited or used as fighters is increasing,” Under-Secretary-General for Coordination of Humanitarian Affairs, Stephen O'Brien, told the 15-member body. 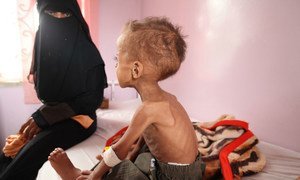 Killing or maiming an average of eight children a day, ‘brutal’ Yemen conflict must end – UNICEF

An average of eight children are killed or maimed every day in Yemen as a direct result of the conflict that has gripping the country since April, according to a new report released today by the United Nations Children’s Fund (UNICEF).