The United Nations Relief and Works Agency for Palestine Refugees in the Near East (UNRWA) today said it has now identified 23 cases of typhoid among the civilian population from the Yarmouk refugee camp, more than threefold increase in the number of six cases first identified on 18 August.

“We are gravely concerned that this is the tip of the iceberg and that the increase in figures reflects an appalling public health crisis inside Yarmouk camp itself. As heat continues to affect Damascus, with temperatures topping 41°C (105°F), and with frequent cuts in water supplies, the risk of epidemics is extremely worrying in Yarmouk, Yalda and other adjacent areas such as Babila and Beit Saham, said UNRWA Spokesman, Chris Gunness.

The agency based its assessments on data collected this week from over 500 hundred medical examinations in the Yalda district of Damascus, near Yarmouk. UNRWA has been treating civilians mainly from the refugee camp which was taken over by Islamic State in Iraq and the Levant (ISIS) on 1 April.

Access to healthcare in these places remains heavily limited, pointed out Mr. Gunness. UNRWA, he added, will continue to treat individual cases to which it has access, administering antibiotics, distributing water purifying tablets and giving appropriate health education guidance.

“However, the situation demands a major public health intervention to improve the water, sanitation and hygiene infrastructure of the camp.”

UNRWA’s priority indeed remains the delivery of humanitarian aid to civilians within Yarmouk itself, explained Chris Gunness, who reiterated the call for respect and compliance with obligations to protect civilians and to establish secure conditions under which life-saving humanitarian assistance can be delivered.

“The vulnerability of civilians in Yarmouk remains of the highest severity. This is a fight against time. We are concerned that unless we see a rapid improvement in the public health situation, the number of typhoid patients could increase to the level of a public health emergency,” the Spokesman insisted.

As violence continues to threaten the lives and safety of Palestine refugees throughout Syria, he appealed for donors to increase their support to the Agency’s $415 million Syria Crisis Appeal, which has received only 30.8 per cent of the funds needed for 2015.

“More than 95 per cent of Palestine refugees in Syria now rely on UNRWA to meet their daily needs of food, water and healthcare. Priority interventions include cash assistance which enables UNRWA to serve up to 470,000 Palestine refugees in need. Additional funding is also required for critical non-food items including blankets, mattresses and hygiene kits for displaced Palestine refugee families throughout the country,” concluded Mr. Gunness. 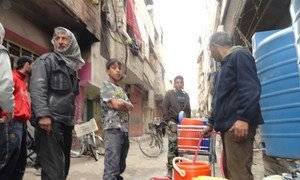 The United Nations relief agency responsible for the welfare of Palestine refugees across the Middle East announced today it has conducted its first humanitarian mission to Yalda, near the besieged Yarmouk camp in Syria, where six cases of typhoid have been confirmed.