Condemning all cases of sexual exploitation and abuse committed by its personnel, the United Nations Multidimensional Integrated Stabilization Mission in the Central African Republic (MINUSCA) today said that it is determined to “stamp out” this “extremely seriously problem.”

“It is a blight on the Mission and on the extremely good work that the overwhelming majority of MINUSCA personnel are doing. We are determined to solve this problem, and ensure that the UN Mission fulfills its mandate, serves the people of the Central African Republic (CAR), and that includes in particular the victims of these types of abuses,” Deputy Special Representative in CAR, Diane Corner, said today during a videoconference from the capital, Bangui.

She told journalists in New York that 13 cases of sexual abuse allegedly involving uniformed personnel of MINUSCA have been recorded since the re-hatting of the Mission on 15 September 2014. “Of these cases, 9 involve alleged attacks on minors,” Mrs. Corner pointed out.

These allegations come on the heels of a case reported on 11 August by the human rights group Amnesty International, also regarding MINUSCA “blue helmets.” The day after the incident was revealed, MINUSCA chief General Babacar Gaye, resigned at the request of the Secretary-General.

“The sharp rise in cases reported in the last 3 months is of concern. However, I believe that this is at least in part due to the rollout across CAR of MINUSCA’s network of field offices,” explained the Deputy Secretary-General, adding that 11 of those offices cover all regions of the country, are staffed by political, civil affairs, human rights, child and women protection officers, to whom such cases can be reported.

Some of the sexual exploitation cases have been reported to the Mission by local journalists and non-governmental organizations (NGOs) and in some cases the families involved. “This shows a level of trust on the part of the population in MINUSCA personnel. We are seeking to do all we can to build this level of trust, by providing an account of our actions,” stressed the UN official.

The Mission’s response to these reports has been to establish quickly whether the allegations are credible, and then to look after the welfare of the victims, who receive medical and psychosocial care.

In cases involving MINUSCA’s troops, it is the responsibility of the troop contributing countries to investigate, while the Mission must preserve the evidence, which provides the basis for convictions, punishment to the perpetrators, Mrs. Corner continued.

“In all cases involving troops serving with a UN peacekeeping operation, the UN has to depend on [these countries] and their justice system to deliver accountability,” she underlined, noting that today, the Minister of justice of the Democratic Republic of Congo gave instructions to the military prosecutor to take action on the dossier presented by the Organization.

Devoting significant efforts to prevention, MINUSCA is making sure that its troops undergo training, including on sexual exploitation and abuse, prior to their deployment in country, and once on the field. Certain designated locations are out of bounds, and curfews apply to both civilian and military personnel, underscored Mrs. Corner.

“Protection of civilians is the first priority of our mandate, and we take this task extremely seriously.” 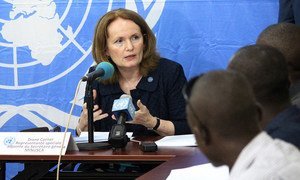 A series of new “disturbing” allegations of misconduct in the Central African Republic were announced today by the Deputy Special Representative and Deputy Head of the United Nations Multidimensional Integrated Stabilization Mission in the country (MINUSCA).