19 August 2015
Envoys from the United Nations and other international organizations today joined to express deep concern that a parliamentary motion to impeach Somali President Hassan Sheikh Mohamud would impede progress on the country’s peace and State-building goals.

In a joint press statement, the UN, the African Union Mission in Somalia (AMISOM), the Inter-Governmental Authority on Development (IGAD), the European Union (EU), the United States and the United Kingdom said, “while we fully respect the right of the Federal Parliament to hold institutions to account and to fulfil its constitutional duties, the submission of any such motion requires a high standard of transparency and integrity in the process and will consume extremely valuable time, not least in the absence of essential legal bodies.”

The organizations also recalled that Somalia and all Member States are bound by UN Security Council Resolution 2232, which set out the expectations of the international community on the security and political progress needed in Somalia, and the need for an electoral process in 2016 without extension of either the legislative or executive branch.

While recognizing the progress in recent years that Somalia has made, especially on federalism, and also recognising the important and courageous contribution made by the federal parliament, often at great human cost, the statement continued, the envoys said the remain concerned about progress on the legislative agenda and the need to pass key legislation including laws on elections, citizenship, political parties’ and the constitutional court.

“Emerging institutions are still fragile. They require a period of stability and continuity to allow Somalia to benefit from the New Deal Somali Compact and to prepare for a peaceful and legitimate transfer of public office in 2016,” says the statement.

In 2014 international partners consistently advocated for political stability and continuity; respect for institutional roles defined within the constitution and strong measures to tackle corruption; and improve public financial management, including in the security and defence sector. In 2015 this remained the organizations’ firm call.

“We are determined to assist the Somali people in preparing for an electoral process in 2016 that will not be dominated by any single institution or stakeholder. The exact choice of electoral process, will be made by Somalis following a national consultative process, in which the executive, legislative, regional administrations as well as civil society across the country will participate. We note that both the Executive and Members of Parliament have endorsed the proposed Action Plan for the national consultative process,” said the statement.

The international organizations believed the Somali people be given the opportunity in 2016 to hold their government and elected representatives to account through an inclusive and transparent electoral process.

Calling on Somali federal institutions to maintain their unity and cohesion during this challenging period, the envoys urged a focus on priorities Somalis have set for themselves: preparation of the electoral process in 2016; formation of federal member states and the constitutional review process, which are vital for stabilisation, governance and State-building; and: fight against Al Shabaab, which is at a crucial juncture, thanks to the support and sacrifice of Somali national security forces, the African Union and partners. 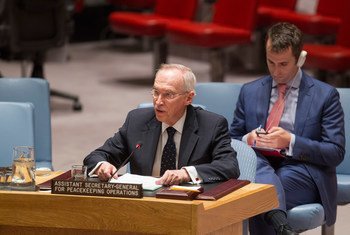 16 July 2015
A United Nations peacekeeping mission in Somalia would be a “high-risk undertaking,” considering the threats posed by Al-Shabaab militants and despite advances made by the African Union Mission in the country (AMISOM), a senior UN official told the Security Council today.