Killing or maiming an average of eight children a day, ‘brutal’ Yemen conflict must end – UNICEF

An average of eight children are killed or maimed every day in Yemen as a direct result of the conflict that has gripping the country since April, according to a new report released today by the United Nations Children’s Fund (UNICEF).

“This conflict is a particular tragedy for Yemeni children,” said UNICEF Representative in Yemen, Julien Harneis. “They are being killed by bombs or bullets, and those that survive face the growing threat of disease and malnutrition. This cannot be allowed to continue,” he stressed.

Yemen: Childhood Under Threat reveals that nearly 400 children have been killed and over 600 others injured since the violence escalated some four months ago.

Disrupted health services, increased levels of child malnutrition, closed schools and higher numbers of children recruited by fighting groups are among the effects of the conflict now ravaging the Arab world’s poorest country, the study finds.

As devastating as the conflict is for the lives of children right now, it will have terrifying consequences for their future, it warns.

Across the country, nearly 10 million children – 80 per cent of the country’s under-18 population – are in need of urgent humanitarian assistance. More than 1.3 million people have been forced to flee their homes.

UNICEF has been at the centre of humanitarian operations in Yemen since the beginning of the conflict, working across the country to respond to the critical needs of children by providing life-saving services, including safe water, as well as treatment against malnutrition, diarrhoea, measles and pneumonia.

Over the past six months, the agency has provided psychological support to help over 150,000 children cope with the horrors of the conflict, while 280,000 people have learnt how to avoid injury from unexploded ordnances and mines.

Yet despite the tremendous needs, UNICEF’s operations remains grossly underfunded. With only 16 per cent of the agency’s funding appeal of $182.6 million met so far, Yemen is one of the most under-funded of the different emergencies UNICEF is responding to around the world.

“We urgently need funds so we can reach children in desperate need,” Mr. Harneis said. “We cannot stand by and let children suffer the consequences of a humanitarian catastrophe.”

While emphasizing the urgent need to end the conflict once and for all, the Fund reiterated its call on all parties to respect their obligations under international humanitarian law and to stop targeting civilians and crucial infrastructure like schools, water and health facilities. 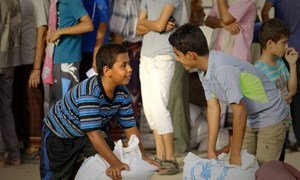 As Yemen plunges deeper into conflict, which has left millions in need of humanitarian aid and wrecked healthcare systems, the country now finds itself in the midst of a major food crisis, a United Nations expert said today as she expressed concern over possibly deliberate starvation of civilians.