Staff from the United Nations Children's Fund (UNICEF) have met with a young girl in the Central African Republic reportedly raped by a UN police officer, the head of the agency has announced, explaining that UNICEF is providing her with “every possible help,” including medical assistance and support to deal with the psychological impact of the ordeal.

“Our UNICEF colleagues in the Central African Republic (CAR) met with the young girl reportedly raped by a UN police officer,” said a press statement issued yesterday by UNICEF Executive Director Anthony Lake, which added that while respecting the integrity of the investigation into the incident, “it is clear that this child has endured a most brutal ordeal.”

The announcement follows a flurry of action at the highest levels of the United Nations after the allegations of sexual abuse and exploitation were revealed early last week by the human rights group Amnesty International concerning actions by UN peacekeepers serving with the Multidimensional Integrated Stabilization Mission in the Central African Republic (MINUSCA).

In the wake of the revelations, UN Secretary-General Ban Ki-moon vowed decisive action and immediately announced that he had accepted the resignation of MINUSCA chief Babacar Gaye, scheduled an urgent meeting with the heads of all United Nations peace operations and Force Commanders, as well as a special closed-door session of the Security Council on the matter.

Mr. Ban told Council members of his “distress and shame over reports of sexual exploitation and the abuse of power by UN forces, police or civilian personnel.” He said: “Even a single allegation represents a serious strike at our institution…we must also bear in mind the profound damage done to credibly carry out the mandates entrusted to us by this very Council.”

The UN chief voiced his frustration with what he described as “far too lenient sanctions for such grave acts affecting men, women and, all too often, children” and stated that the failure to pursue criminal accountability for sexual crimes was “tantamount to impunity.”

“Let us pledge to do more – much more – together to protect civilians and uphold the values of the United Nations,” the Secretary-General said.

In yesterday's statement, Mr. Lake said UNICEF in CAR is offering the reported victim, and her family, “every possible help – including medical assistance, support to deal with the psychological impact of the assault, and legal advice.

“Our hope is that the process of healing for this young girl can now begin. It is also important that she is afforded absolute privacy so she does not suffer any further distress,” the UNICEF chief concluded. 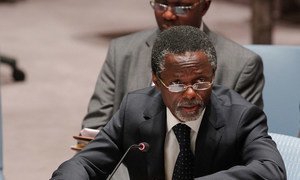 Secretary-General Ban Ki-moon today announced the appointment of Parfait Onanga-Anyanga of Gabon as his Acting Special Representative for the Central African Republic and Head of the United Nations stabilization mission in the country, known as MINUSCA.