Strongly condemning attacks in Sirte by the so-called Islamic State (Daesh), the United Nations Support Mission in Libya stressed today it is “high time” that Libyans agree a unity government to address the country's challenges and “join together to confront the scourge” of the group, also known as the Islamic State of Iraq and the Levant, or ISIL.

In a statement the UN Mission, known as UNSMIL, deplored the attacks in the coastal city of Sirte, including reports of indiscriminate shelling of residential neighbourhoods and the killing of captives the terrorist group has controlled since May.

“At a time when Libyan key political stakeholders gathered in Geneva for a dialogue to resolve the country's crisis and send a strong message of unity, the terrorist group once again struck to impose its reign of terror” said the statement.

The latest round of UN-sponsored political talks just wrapped up in the Swiss city and UNSMIL has reported that the participants “reiterated their conviction that there can be no alternative to peace in Libya outside this dialogue process, which sets the framework for a comprehensive political settlement that is achieved through consensus.”

According to news reports, the latest spate of violence in Sirte erupted this past Tuesday and has continued throughout the week, leaving dozens of casualties.

Warning “time and again” of the growing danger of Daesh and the threat the group poses to the country's unity as well as to all Libyans irrespective of their affiliation, UNSMIL stressed that it is “high time that Libyans set aside their differences and join together to confront the scourge of Daesh.

While UNSMIL noted Libyan calls for swift action to save Sirte and its people from Da'esh's hold and prevent atrocities, the Mission urged the Libyan stakeholders to urgently finalize a political agreement and establish a Government of National Accord that, in partnership with the international community, can address the threat of Daesh and other challenges facing the country.

“Terrorism is becoming a regional threat, with a reach surpassing national borders and causing so much suffering to the people,” said the Mission, condemning all acts of terrorism, including the recent abduction and murder of a Croatian national in Egypt. 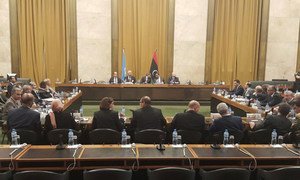 The latest round of the United Nations-facilitated Libyan political dialogue has concluded in Geneva, with the different parties emphasizing the need to set aside partisan agendas and uphold the country’s higher national interests.