Secretary-General Ban Ki-moon today announced the appointment of Parfait Onanga-Anyanga of Gabon as his Acting Special Representative for the Central African Republic and Head of the United Nations stabilization mission in the country, known as MINUSCA.

Mr. Onanga-Anyanga succeeds Lieutenant General Babacar Gaye of Senegal, who resigned on 12 August amid allegations of sexual abuse and exploitation against peacekeepers at MINUSCA.

The Secretary-General is grateful for Lieutenant General Gaye’s long and distinguished record of public service in the United Nations, most recently, over the past two years, during a critical period in the Central African Republic.

Mr. Onanga-Anyanga brings with him several years of experience with the UN in conflict-affected areas, including as Head of the UN Office in Burundi (BNUB), having served most recently as the Assistant-Secretary-General, System-Wide Senior Coordinator on Burundi in addition to his role as the Coordinator of UN Headquarters Response to the Boko Haram crisis.

From 1998-2004, he held a variety of political and managerial positions at the Preparatory Commission of the Comprehensive Nuclear Test-Ban Treaty Organization in Vienna and New York. Earlier in his career, he was acting Secretary of the UN Standing Advisory Committee for Security Questions in Central Africa, and served as First Counsellor for Disarmament and Political Affairs at the Permanent Mission of Gabon to the UN in New York. 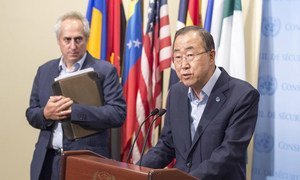