UNICEF/Kate Holt
Displaced people taking shelter at the UN Mission in South Sudan (UNMISS) base in the city of Malakal.
14 August 2015

The United Nations humanitarian wing has reported that the month-long restrictions on the movement of goods by air and river routes in South Sudan have been lifted, allowing delivery of aid supplies in crisis-torn Malakal, and has warned of a “dire situation” as fighting continues.

“The lifting of the restrictions has allowed humanitarian partners to start resupplying critical medicines, fuel, food and water treatment chemicals in Malakal in Upper Nile state,” the UN Office for the Coordination of Humanitarian Affairs (OCHA) said.

Partners are working to ensure supplies continue to be delivered to Upper Nile to avert a further deterioration of the already dire situation, according to an updateissued Thursday.

Restrictions on the movement of barges on the River Nile, as well as clearances to use the Malakal airstrip had affected the delivery of life-saving assistance to vulnerable people in Upper Nile state. No barges arrived in Malakal during July and no flights were able to land at the airstrip from the end of June until 7 August.

Humanitarian partners continue to negotiate with all parties on the ground to access Wau Shilluk to be able to restock water, sanitation and hygiene supplies, including fuel for water system, which are exhausted there.

More than 10,000 people, mainly from Wau Shilluk, have arrived to the Malakal civilian protection site since 1 August, bringing the total number of displaced people seeking refuge at the site to 46,500 and causing a severe congestion and stretching the capacity of aid agencies to provide humanitarian services.

OCHA says that relief agencies are racing to cope with the influx as the rainy season creates increasingly desperate living conditions. Although partners undertook an extensive operation to expand the protection site in 2014 and 2015, it was designed to accommodate only 18,000 people. 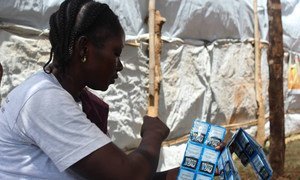 As the battle against cholera outbreak continues in South Sudan, the United Nations World Health Organization (WHO) and its partners are boosting assistance to help children and the most vulnerable prevent and reduce the spread of further cases.