Marking International Day of Youth, United Nations Secretary-General Ban Ki-moon stressed that no one knows better than young people the issues at stake in today's rapidly changing world or the best way to respond, and declared: “That is why I am calling on young people to speak out – and I am urging leaders to listen.”

Marking International Day of Youth, United Nations Secretary-General Ban Ki-moon stressed that no one knows better than young people the issues at stake in today's rapidly changing world or the best way to respond, and declared: “That is why I am calling on young people to speak out – and I am urging leaders to listen.”

As the world changes with unprecedented speed, young people are proving to be invaluable partners who can advance meaningful solutions, the Secretary-General stated in a message issued for the Day, observed each year on 12 August.

This year's theme – 'Youth Civic Engagement' – emphasizes the involvement and inclusion of young people in building social cohesion and collective well-being, underlined Irina Bokova, Director-General of the UN Educational, Scientific and Cultural Organization (UNESCO), in her message on the Day.

“From social entrepreneurs to journalists, from voluntary workers to members of community organizations, young people contribute to shaping society to lead it towards political, cultural and economic renewal,” she stressed.

As world leaders prepare to adopt a bold new vision for sustainable development next September, the engagement of youth is more valuable than ever, assured the Secretary-General. “At this critical moment in history, I call on young people to demand and foster the dramatic progress so urgently needed in our world.”

“Sustainable Development Goals (SDGs) are for you – and will only be achieved with you,” the Secretary-General added during an event organized in New York by the UN Department of Economic and Social Affairs and the UN Development Programme (UNDP).

Calling today’s youth the “SDG generation,” he urged member states to include young people in the delegations for the upcoming summit to adopt the agenda. Convinced that volunteerism is an “ideal” way to improve society, Mr. Ban, in his message, also encouraged youth to join forces with the UN in moving to the implementation phase. “I stand with the world’s young people in calling for measures to secure human rights, economic progress, environmental stewardship and social inclusion.”

In support of their aims, the Secretary-General's Envoy on Youth, Ahmad Alhendawi, is working to mobilize the “largest generation of young people in history to turn the world we want into the world we deserve”, Mr. Ban noted, while Mrs. Bokova observed that young people must be considered as “drivers of change,” and not only beneficiaries or targets.

At the UN Headquarters in New York, the UN Department of Economic and Social Affairs and the UN Development Programme (UNDP), with the support of the UN Inter-agency Network on Youth Development, is organizing an event to commemorate International Youth Day .

In a recent interview with the UN News Service, Mr. Alhendawi said the message of this year's Youth Day is one of hope.

“This is unique year in the history of the United Nations; a year where we are adopting new Sustainable Development Goals a very bold promise for the future [and] a new climate change agreement. That is it is so fitting that we celebrate this International Youth day under the theme 'Youth Civic Engagement,' because I believe the password to achieve the Sustainable Development Goals is engaging young people in their implementation.”

Indeed, with the current cohort of young people the largest the world has ever seen, “the smart thing to do,” he continued, “is to engage them as partners in development and in implementation.”

As such, he encouraged young people who are already active in their communities to step up their engagement. He also called on Governments to scale up their investments in young people and open more mechanism for them to be involved in decision-making processes.

“For young people who are still in doubt about whether their participation will make a difference in the world, I invite them to come on board with the United Nations and be part of this global movement that is trying to eradicate extreme poverty in 15 years and put our planet on a path of sustainability. We have a very exciting time ahead and we need everybody to come on board,” he declared. 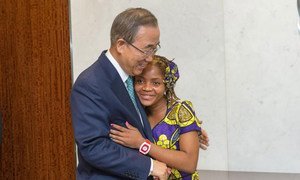 Each year 20 per cent of the world's young people experience a mental health condition, the United Nations reported in a new publication launched to coincide with International Youth Day which this year shines a spotlight on the importance of mental health.