With political will, Libyan parties can reach settlement by month’s end – UN envoy

With Libya’s disparate factions starting to coalesce around United Nations-backed proposals on a comprehensive settlement and a unity government, UN special envoy Bernardino León previewed the latest round of talks opening in Geneva today, telling reporters that with political will, the parties could wrap up “this very difficult process” with an agreement by the end of August.

"We will work in coming days on the basis of a timetable which necessarily has to be short. Libya is facing huge challenges," said Mr. León, who is the UN Special Representative and head of the UN Support Mission in the strife-torn country, known as UNSMIL.

"We are proposing the parties to work on the coming three weeks and to try to have agreement on the important two points, by the end of August,” he said, referring the draft political proposal he presented to the parties in mid-June, which includes several annexes and outlines the parametres of a unity government.

He said that the “nomadic process” – the UN-sponsored dialogue that began earlier this year in Geneva, has travelled to Morocco, Algeria and Libya itself dealing with different parties and tracks, including civil society representatives, political parties and political leaders, as well as militias – was always intended to converge, “and this is what we are doing today.”

“On the one hand we are starting a new round of talks [focused on] the annexes and unity government, and starting a convergence of tracks by bringing political parties, and in the coming days we intend to do the same with the other tracks.”

Mr. León stressed that that the security track – participation and input from the militias and those who are on the ground, “has been important to reaching where we are now; to stabilizing the situation in the west. And of course we are looking forward to having more interaction with the army and to different actors in the eastern part of the country.”

He acknowledged that in the past weeks, there have been “serious problems” in the south of the country. “It is very important that the situation there also be stabilized. This process is about the whole of Libya; East, West and South should be a part of the effort to bring about stability and security in line with the agreement,” he declared.

Mr. León said that if the parties stick to the timeline and follow the path set out in the agreement – “and this will very much depend on the political will, creativity and wisdom of the parties to put…good proposals on the table” – then the endorsement and final voting and signing of the agreement could happen in the first week of September, so that the final conclusion of this process can be achieved before the opening of the substantive session of the UN General Assembly in mid-September.

“This would be the ideal scenario. But we know that we are in a very difficult process; many actors, many challenging issues,” he said and added, in response to a question: “I hope all the Libyan actors will…expedite the talks and to reach an agreement very soon.”

“I think it is extremely risky to reach October without an agreement, because we will be in a more chaotic situation. This is why it’s important to have this timeline and to finalize these discussions in the coming three weeks and then to expedite also the endorsement and voting of the agreement.”

To this end, he said UNSMIL has been pleased to see that all actors will be around the table and although there had been a delay in resumption of the talks, the delay was worthwhile in order to bring everyone to the table.

But whether they will stay of whether it will be possible to go to the stage of discussing the annexes and the government will very much depend on the will of the parties, noted Mr. León. “But UNSMIL, the international community, and I would say even all the Libyans involved in the process, have done everything possible to have all the parties around the table. This is the inclusion principle that is so important to this process; together with consensus and balance.”

Telling reporters that the latest round of dialogue will be a new chance to provide a “big drive” for the political process, he said that listening to the concerns of all the parties has been reason for the “limited success we have had so far with an agreement, where most parties are converging. So we will continue to listen to all parties. This process will only be successful if we can reassure everyone. And it is possible to reassure everyone.”

“So we will continue to listen and work with all of them and we hope that [the parties] will give the process the benefit of the doubt to see what the ‘final picture’ will be at the end of the day. If that final picture [emerges] with detailed annexes and a unity government in which all Libyans feel represented, then I am sure…that will be reassuring,” said Mr. León. 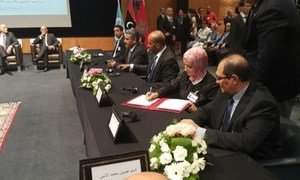 Libya: new round of UN-facilitated political dialogue set to begin next week

With a new round of the United Nations-facilitated political dialogue set to begin next week in Geneva, the top UN envoy for Libya, Bernardino León, has urged the parties to redouble their efforts to find a peaceful resolution to the conflict in the country.