OCHA/Gemma Cortes
The Central African Republic (CAR) has been suffering a devastating humanitarian crisis, and more than half of the population – 2.7 million people – are in need of aid.
11 August 2015

The United Nations has allocated over $13 million dollars for the immediate distribution of life-saving assistance targeting those affected by the ongoing violence in the Central African Republic (CAR), the Organization's relief arm reported today.

According to a press release issued by the Office for the Coordination of Humanitarian Affairs (OCHA), the UN's Common Humanitarian Fund (CHF) in the CAR has released $13.2 million to help support local aid agencies deliver clean water, education, healthcare, livelihoods support, nutrition, protection, and shelter to people displaced by violence, returnees, refugees and vulnerable host communities.

“Thanks to donors who have contributed in 2015, this CHF allocation allows humanitarian partners to continue helping thousands of displaced people and host families,” said Aurélien Agbénonci, the UN's Humanitarian Coordinator in the African country. “However, it is only three per cent of the $415 million we still need by the end of the year if we are to save more lives and reach all people in acute need in 2015.”

More than two years of civil war and sectarian violence have displaced thousands of people in CAR amid ongoing clashes between the mainly Muslim Séléka alliance and anti-Balaka militia, which are mostly Christian. In addition, the Lord's Resistance Army (LRA) continues to operate in the south-eastern part of the country.

“Our goal is to make sure aid gets to those who need it the most and as quickly as possible,” Mr. Agbénonci continued.

The UN official praised the allocation of funding as “necessary,” noting that the financing would ultimately help those “worst affected by violence, disease and displacement.” But, he added, more and more funds would still be required to continue to meet affected people's needs over the coming months.

The UN estimates that some 450,000 people remain displaced inside the country while thousands of others have sought asylum across the borders. OCHA confirmed, however, that overall some 2.7 million people in the CAR remain in direct need of “urgent humanitarian assistance.” 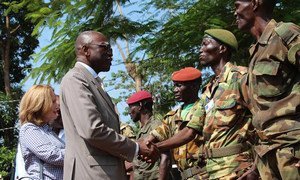 Political progress combined with the deployment of United Nations peacekeepers in nearly 40 localities have contributed to the improvement of the overall security situation in Central African Republic (CAR), which nonetheless remains precarious, the top UN envoy in the country told the Security Council today.