A severe funding shortfall in Iraq is pushing the United Nations World Food Programme (WFP) to cut the amount of aid it delivers to nearly one million displaced people in the war-torn country, the Organization has confirmed.

“Unfortunately, lack of funds and the rise in the number of displaced Iraqis forces us to reduce the size of the food rations we provide to tens of thousands of families living outside camps,” Jane Pearce, the WFP Representative and Country Director in Iraq, said in a press release issued earlier today.

The WFP said it had begun to prioritise available funds for internally displaced people, otherwise known as IDPs, in April once resourcing difficulties became evident. People previously receiving food vouchers had the voucher value reduced to $16 from $26 while the UN agency also halved the size of family food parcels it distributes monthly. Today, the food parcels cover 40 percent of a household’s daily needs instead of 80 per cent.

The overall reductions will now coerce many families to supplement their assistance with store-bought food products. However, according to the WFP’s vulnerability assessments, two in five internally displaced households (40 per cent) do not have enough food or money to shop.

The reduction in food assistance comes, in fact, at a critical time for those displaced by the conflict and amid funding shortfalls across the UN system.

According to the Organization, almost three million Iraqis have fled their homes and continue to move across the country, exacerbating a dwindling humanitarian system. Meanwhile, just last week, the UN’s World Health Organization (WHO) revealed it had been forced to suspend 84 per cent of frontline programmes in 10 governorates in Iraq in July due to insufficient funding, leaving almost three million people without access to urgently-needed healthcare services.

“We recognize families living outside camps are living in tough conditions, but we had to make this difficult decision to stretch our help for the most vulnerable until we receive more funds,” Ms. Pearce concluded. 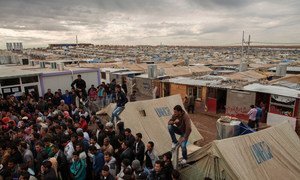 In an effort to meet the food needs of the most vulnerable Syrian refugees living in Iraq, the United Nations World Food Programme (WFP) has announced that it will focus its resources this month on those living in the country’s Kurdistan region.