UNICEF/NYHQ2009-0832/Williams
Birth registration for indigenous children takes place in the Republic of Congo, where they suffer disproportionately from the lack of nutritious food and health services
9 August 2015

United Nations Secretary-General Ban Ki-moon has called on the international community to commit to do more to improve the health and well-being of indigenous peoples, who face a wide range of challenges from inadequate sanitation and housing to high rates of diabetes, drug and alcohol abuse.

In his message to mark the International Day of the World's Indigenous Peoples message, observed annually on 9 August, Mr. Ban noted that most of the challenges they face to their health and well-being are “eminently preventable.”

They include inadequate sanitation and housing, lack of prenatal care, widespread violence against women, and high rates of diabetes, drug and alcohol abuse, youth suicide and infant mortality.

“These issues must be urgently addressed as part of the post-2015 development agenda in culturally appropriate ways that meet indigenous peoples' conceptions of and aspirations for well-being,” the Secretary-General stressed.

The UN Declaration on the Rights of Indigenous Peoples affirms the right to maintain indigenous health practices as well as to have access to all social and health services for the enjoyment of the highest standards of physical and mental health.

“We must make every effort to support indigenous peoples' rights and aspirations as affirmed in the Declaration,” said Mr. Ban.

“On this International Day of the World's Indigenous Peoples, I call on the international community to ensure that they are not left behind. To create a better, more equitable future, let us commit to do more to improve the health and well-being of indigenous peoples.” 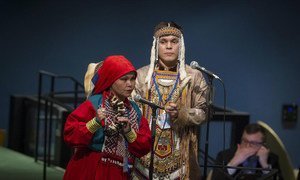