The United Nations World Food Programme (WFP) today announced that it has delivered aid to 82,000 people in the most flood-affected parts of western Myanmar, and is now working to reach 200,000 people.

“With so many areas cut off, we are still trying to get a clear picture of how these floods have affected people in Myanmar,” said WFP Country Director Dom Scalpelli. “Food security will be seriously affected. Thousands have lost homes, livelihoods, crops and existing food and seed stocks. We are acting quickly to provide emergency relief and prevent this disaster from exacerbating existing food insecurity and malnutrition.”

Working with the Government, UN agencies and local NGOs, WFP has now reached 82,000 people with food since the start of the response on 2 August. The authorities and local airlines are assisting with free transport of WFP's food to areas inaccessible by road.

Flooding and landslides caused by heavy monsoon rains have impacted more than a quarter of a million people in 12 out of Myanmar's 14 states and nearly 208,000 people are now estimated to be in need of immediate food assistance. Both of these figures are expected to rise as further information becomes available.

WFP is appealing for additional resources to respond to the floods emergency. Some $3 million per month is required to meet the currently-estimated flood needs, on top of existing operations in the country. Funding needs are expected to grow as the number of affected people increases.

The Organization's largest programme in Myanmar before the flooding was the ongoing distribution of food assistance to displaced people in Rakhine State, where floodwaters are hindering an accurate assessment of food needs at this time. 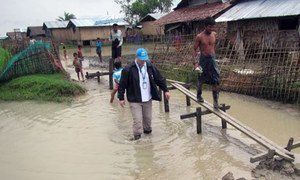