OCHA/Tilak Pokharel.
At the Bandeu checkpoint in Nepal, inspectors and a police constable approach a bus to look for potential victims of child trafficking onboard.
30 July 2015

Secretary-General Ban Ki-moon today urged every country to join the fight against human trafficking as United Nations agencies and their partners vowed to work together to support and protect victims of this transnational crime, while pursuing and prosecuting criminals and their networks.

In 2013, the UN General Assembly designated July 30 as the World Day to “raise awareness of the situation of victims of human trafficking and for the promotion and protection of their rights.”

In his message on the Day, UN Secretary-General Ban Ki-moon flagged the need to crackdown on criminal trafficking networks that thrive in countries where the rule of law is weak and international cooperation is difficult.

“I call on all countries to fight money laundering and sign and ratify the UN Conventions against corruption and transnational organized crime, including the latter’s human trafficking protocol,” Mr. Ban said.

He also applauded the donors who have enabled the UN Voluntary Trust Fund for Victims of Trafficking in Persons to assist thousands of people and called for greater contributions to help the many million other victims of this crime move forward with their lives.

Pressed into servitude as unpaid domestic workers, exploited for sex, exposed to violence and abuse, 2.5 million people are victim to human trafficking - a global industry that generates billions of dollars for organized crime. Shown, a young Bangladeshi trafficking victim who was sold to a brothel. UNICEF-NYHQ2009-2579-Shehzad Noorani

Human trafficking ranks as the world’s third most profitable crime after illicit trade in drugs and arms. Forced labour in the private sector alone, including commercial sexual exploitation, generates $150 billion in illegal profits annually. Above, in Timor Leste, two women in police custody after working at a bar where prostitution was taking place. UN/Martine Perret

Most of those trafficked are women and children, tricked by traffickers into a life of suffering and forced to work under conditions akin to slavery. Pictured, in Benin, two children at a UN-backed emergency centre who were rescued from Nigeria where they had been trafficked (file). UNICEF-ITAL2010-Donata Lodi

Traffickers prey on the poor and uneducated in search of a job and a better life. Accelerating development for all would make people less vulnerable, the UN says. Here, Burmese labourers in Thailand often fall victim to unscrupulous traffickers who, for a fee, sell them to greedy ship captains and exploiters. US State Department/Kay Chernush

Trafficking is fuelled by demand for cheap goods and services derived from exploitation, such as prostitution, or by people who are not paid a living wage. Shown, at a workshop in Mumbai, India, young men from an impoverished village sew beads and sequins onto shawls. They are reported to be working 20 hours a day for meagre or no pay. US State Department/Kay Chernush

No country is immune

The crime of human trafficking affects people in every country, and every government has the responsibility to fight it, says the UN, through cross-border cooperation, investigations and prosecutions, and preventive efforts. Above, in Serbia, anti-human trafficking agents use thermal imaging to scan people crossing the border into Hungary. UN.GIFT/UNODC/Alessandro Scotti

The UN Voluntary Trust Fund for Victims of Human Trafficking supports non-governmental organizations (NGOs) that help survivors. Shown, in Haiti, a street kid talks to a psychologist from a UN-backed NGO. The organization provides counseling for trafficked children and runs workshops to raise community awareness of child rights. UNICEF-NYHQ2011-2245-Marco Dormino

The World Day against Trafficking in Persons (30 July) is a call to action to end this horrific crime by uncovering and exposing traffickers, safeguarding vulnerable children, women and men from exploitation, and protecting and rehabilitating victims. Above, two 16-year-old girls who were trafficked to Western Europe for sexual exploitation await help at a crisis centre in Bulgaria. UN.GIFT/UNODC/Alessandro Scotti

In the joint video message, International Labor Organization (ILO) Director-General Guy Ryder, said “21 million of the most vulnerable workers have been tricked and trapped into forced labour.”“We cannot stop until we get every single one of them out of forced labour,” Mr. Ryder said.

UN Women Executive Director Phumzile Mlambo-Ngcuka noted in her message that almost three-quarters of trafficked persons are women and girls and almost all people trafficked for sexual exploitation are women.

And Yury Fedotov, Executive Director of the UN Office on Drugs and Crime (UNODC), said “we must give them hope and justice.”

UNODC’s most recent biennial Global Report on Trafficking in Persons highlights the true extent of the crime. With at least 152 countries of origin and 124 countries of destination affected by trafficking in persons, and over 510 trafficking flows crisscrossing the world, no country is immune.

Coupled with this, society’s most vulnerable appear to be increasingly targeted by those responsible for this crime: 33 per cent of known victims of trafficking are children, a five point increase compared with the 2007-2010 period. Girls make up two out of every three child victims. Together with women, they now account for 70 per cent of trafficked persons worldwide.

In 2010, the UN General Assembly adopted the Global Plan of Action to Combat Trafficking in Persons, urging Governments worldwide to take coordinated and consistent measures to defeat this scourge. The Plan calls for integrating the fight against human trafficking into the UN’s broader programmes in order to boost development and strengthen security worldwide. 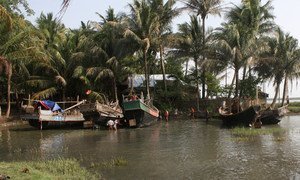 The United Nations refugee agency today expressed its deep concern over the discovery of dozens of bodies in smugglers’ camps in Thailand, appealing for a regional effort to end human trafficking and protect those who escape difficult conditions from “the hands of ruthless smugglers.”