The verdicts in the trial of 37 Qadhafi regime officials, including against the former leader’s son, Saif al-Islam Qadhafi, handed down today by the Tripoli Court of Assize, has drawn serous concern from senior United Nations human rights officials in Libya, as well as in Geneva, amid fears the trial did not meet international standards on a number of fronts.

“Concerns over the trial include the fact that several defendants were absent for a number of sessions. The evidence of criminal conduct was largely attributed to the defendants in general, with little effort to establish individual criminal responsibility,” said Claudio Cordone, Director of the Human Rights, Transitional Justice and Rule of Law Division of the UN Support Mission in Libya (UNSMIL).

The court also announced today that Saif al-Islam Qadhafi, son of Muammar Qadhafi, and six others had been tried in absentia. Qadhafi, former intelligence chief Abdullah al-Senussi, Qadhafi's last Prime Minister al-Baghdadi al-Mahmudi and six other defendants were sentenced to death by firing squad, points out a press release issued by UNSMIL.

Mr. Qadhafi – the first defendant on the list of 37 – was connected by videolink from Zintan, where he is jailed, only to four of the 24 sessions. Libya has not complied with the International Criminal Court order to surrender him.

The defendants were charged with a wide range of offences relating to the attempted suppression of the 2011 revolution.

“The prosecution did not present any witnesses or documents in court, confining itself entirely to the written evidence available in the case file, thus missing a historic opportunity to construct a public record of crimes committed by the former regime – a key step in Libya's transitional justice process”, regretted Mr. Cordone.

During their pre-trial detention, he added, defendants were denied access to lawyers and family for prolonged periods, and some reported that they were beaten or otherwise ill-treated, but UNSMIL is not aware of any investigation into these allegations.

Defence lawyers said they faced challenges in meeting their clients privately or accessing the full case file, some saying they received threats and that witnesses were reluctant to appear in court due to fears about their safety. The court did not respond to defence counsel requests to examine prosecution witnesses.

“Given these shortcomings, it is particularly worrisome that the court has handed down nine death sentences,” Mr. Cordone said. “International standards require that death sentences may only be imposed after proceedings that meet the highest level of respect for fair trial standards. The United Nations opposes the imposition of the death penalty as a matter of principle.”

Moreover, the next step in the judicial process is only cassation – a review of the application of Libyan law, not of questions of fact – rather than a proper appeal as required by international standards. “UNSMIL had previously urged the Libyan authorities to reform their national legislation introducing the possibility of an appeal for verdicts of the Court of Assize, in line with their obligations under international human rights law,” Mr. Cordoned reminded.

UNSMIL, he stated, will review the verdict once published in full over the coming period before completing its full assessment of the trial.

Many of these concerns were echoed in Geneva by Ravina Shamdasani, spokesperson for the UN High Commissioner for Human Rights, who told reporters that her Office (OHCHR) is “deeply disturbed” at the verdicts and sentences handed down today.

“We had closely monitored the detention and trial and found that international fair trial standards had failed to be met. Among the key shortcomings is the failure to establish individual criminal responsibility in relation to specific crimes,” she said, adding that there were also serious issues relating to access to lawyers, claims of ill-treatment, and trials conducted in absentia.

Ms. Shamdasani stressed that while it is crucial to ensure accountability for serious human rights violations, “this needs to be done with scrupulous adherence to international fair trial standards and with full respect for the rights of the defendants. Failing this, injustice is only compounded.”

“The UN opposes the use of the death penalty in all circumstances. In this case, where fair trial standards have clearly not been met, we strongly deplore the imposition of the death penalty,” she said, urging that Libyan authorities to ensure that legal reforms are introduced as a matter of urgency, to ensure that human rights are fully respected in the administration of justice and that verdicts of the Court of Assize can be appealed and are not only subject to cassation. 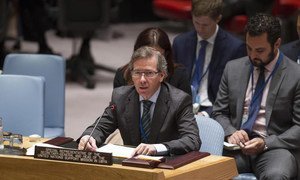