The top United Nations humanitarian official in Iraq today declared as “devastating” the “inexplicable” closures of life-saving services in Iraq for people in need, citing the most recent shut-downs of basic health care will directly impact more than one million people, including some 500,000 children who now will not be immunized, spreading risk of a measles outbreak and resumption of polio.

The most recent cutbacks come on top of recent “cascading” closures that has affected food rations, water supplies, sanitation and hygiene services as well specialized programmes for one million women and more than 1.2 million girls, many of whom the survivors of brutality and sexual and gender-based violence, according to a press release by UN Humanitarian Coordinator for Iraq, Lise Grande.

“At a time when the people of Iraq need us the most, we are letting them down,” Ms. Grande said from Baghdad.

UN humanitarian partners are seeking $498 million to cover the costs of providing shelter, food, water and other life-saving services for the remainder of the year, but to date, only 15 per cent of this has been secured.

Ms. Grande confirmed today that 184 front line health services have been suspended because of the “paralyzing” funding shortfall for humanitarian activities in Iraq, meaning that more than 80 per cent of general health programmes supported by humanitarian partners are now shuttered, directly impacting one million people.

“The impact is immediate and enormous,” according to the press release. Partners estimate that one million sick people, who would have sought primary medical care, will not receive help.

“Over half a million children will not be immunized, spreading the risk of a measles outbreak and the resumption of polio and contributing to morbidity amongst some of the most vulnerable children in the entire region,” it said.

Less than two months ago, on 4 June, the UN and partners urgently appealed for funding for the most highly prioritized, pared-to-the bone appeal ever launched in the region, Ms. Grande said.

“Although some support is coming in, it’s devastating, inexplicable really, that we are being forced to shut-down programmes in a country where so much is at stake and where the international community is so involved,” she said.

In one year, the number of people requiring life-saving assistance has quadrupled; poverty rates in the Kurdistan region where more than a million displaced people have sought safety, have doubled, and an estimated 8.2 million people are in urgent need of humanitarian aid – including 2.3 million people living in areas controlled by the Islamic State of Iraq and the Levant, according to Ms. Grande’s office.

As conflict intensifies, at least another one million more people will need help to survive before the end of 2015, it said. 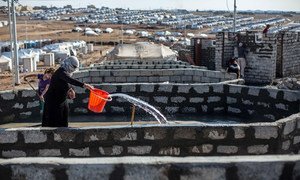 With more than 74,000 new people displaced by fighting on the move in Iraq, the United Nations humanitarian wing has warned that overall, some 40 per cent of critically needed life-saving water and sanitation programmes will be forced to shut down by the end of the month due to lack of funding.