UNSMIL (file)
A girl looks out of her house window in Benghazi, Libya.

23 July 2015
Deeply concerned by escalating violence in southern Libya, the United Nations Support Mission in the crisis-torn country called for an immediate ceasefire today amid fighting that has claimed dozens of lives in recent weeks and is a “further reminder of the chaos engulfing Libya and the need for the main…actors to move quickly to reach a political settlement.”

In a press statement, the UN Support Mission, known as UNSMIL, expressed deep concern about the renewed clashes in southern Libya, particularly in the cities of Sabha, al-Kufra and Awbari, and called for an immediate end to the violence.

Reports indicate that the recent fighting in Sabha has resulted in scores of people killed, including three women and four children. The repeated clashes in the area have also forced hundreds of families to flee their homes and seek refuge with other communities, the Mission stated.

“UNSMIL calls for an immediate ceasefire and supports all local and national efforts for peace and reconciliation. The Mission also urges the sides involved in the confrontations to exercise maximum restraint, listen to the voice of wisdom and engage in talks to address their differences by political means,” said the statement.

The Mission went on to remind all sides to the conflict that attacks against civilians are prohibited under international humanitarian law and can constitute war crimes.

“The escalation in fighting in the south, along with a sharp rise in criminal activities in Sabha which have claimed the lives of more than 60 people in recent weeks, are further reminders of the chaos engulfing Libya and the need for the main Libyan actors to move quickly to reach a political settlement that would restore state authority and ensure security and stability to their country.” UNSMIL concluded.

Late last week, the UN Security Council welcomed the initialling of the Libyan political agreement in Skhirat, Morocco, on 11 July, as the latest step towards resolving the country's political crisis.

The agreement's initialling is the result of ongoing UN-facilitated consultations between various Libyan parties and comes amid sporadic fighting across the North African country.

“The members of the Security Council recognized the political will and courage demonstrated by those who initialled this draft agreement, which seeks to resolve Libya's institutional and security crises,” the 15-member Council declared in a statement issued late this afternoon. 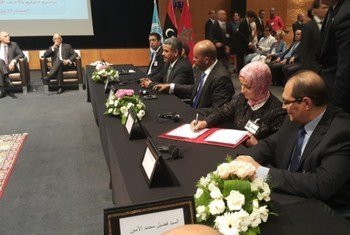 16 July 2015
The United Nations Security Council has welcomed the initialling of the Libyan political agreement in Skhirat, Morocco on 11 July as the latest step towards resolving the country's political crisis.