Taking note of the “broadly peaceful” conduct of polling in the Burundian presidential elections on 21 July, the top United Nations official today called on all parties to continue to remain calm and immediately resume an inclusive political dialogue.

Among other things, the said document stipulates that “whoever wins the presidential elections in Burundi should form a government of national unity involving those who participated in elections and those who did not.”

The Secretary-General, adds the UN Spokesperson, reminds the Burundian authorities of their responsibility to guarantee and protect the safety and security of the civilian population and ensure an end to further acts of violence, as well as accountability for any human rights violations committed.

“In this regard, the Secretary-General welcomes the deployment of AU human rights observers and military experts aimed at helping prevent an escalation of violence and facilitating a peaceful resolution of the serious political crisis affecting Burundi.”

The mounting violence across Burundi has also provoked a widespread humanitarian crisis as refugees have spilled across the country's borders and fanned throughout the region. Indeed, by mid-July, more than 145,000 people had already fled to neighbouring countries. 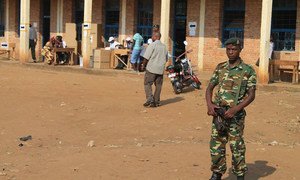 Ban urges parties in Burundi to refrain from violence during elections

In a “worrisome context,” and following the decision of the government of Burundi to hold the presidential election on 21 July, the United Nations chief called yesterday on the authorities to do all in their power to ensure security and a peaceful atmosphere during the polls.