No new cases of Ebola were reported in Liberia nor in recent hotspots in West Africa with half the 26 cases in this week’s update from the United Nations World Health Organization (WHO) coming from the capitals of Guinea and Sierra Leone, bringing the number of people who have died of the disease to 11,269.

WHO also reported today that on 20 July, Italy was declared free of Ebola transmission after the completion of 42 days without a case since the country’s first and only case of the disease was confirmed EVD-negative and discharged from hospital.

In West Africa, where the outbreak hit hardest, “there are also indications of a continuation of the improvements in contact tracing and case investigation seen in recent weeks, with all but 2 cases arising among registered contacts of previous cases, including all 13 of the cases reported from the Guinean capital Conakry,” according to the WHO update.

WHO said no new cases were reported in Liberia, where Ebola resurfaced after it had been declared free of the disease in May, and said that as of 21 July, 56 contacts associated with the chain of transmission are under follow-up.

“If there are no further cases all contacts will have completed follow-up on 2 August,” WHO said.

The origin of the new cases in Liberia remains under investigation, it said, adding that “preliminary evidence from genomic sequencing suggests that the most likely origin of transmission is a re-emergence of the virus from a survivor within Liberia, rather than an importation from Guinea or Sierra Leone.”

Other recent hotspots of transmission such as Boke in Guinea and Kambia in Sierra Leone have now reported no cases for 18 and 9 days, respectively, the UN health agency said. 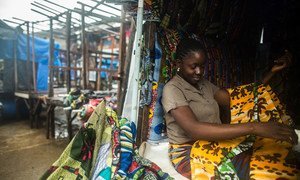 United Nations Secretary-General Ban Ki-moon today focused world attention on the “final stretch” of the response to the Ebola outbreak in West Africa, an epidemic that has killed more than 11,000 people, saying: “let us collectively take a deep breath and resolve to finish the job” and put the most affected countries on the path of recovery.