World Bank/Arne Hoel
Cooling down on a hot day in Omdurman, Sudan.
21 July 2015

From January to June 2015, the globally averaged temperature over land and ocean surfaces was the hottest for such period on record, the United Nations World Meteorological Organization (WMO) reported today, citing new highs across the planet in June, with heatwaves across South Asia, Europe and pockets of the United States.

Over the past six months, the average temperature was 0.85°C above the 20th century average of 15.5°C, WMO spokesperson Clare Nullis told a press briefing in Geneva today, adding that the major concern was about the ocean heat that was constantly rising, according to the figures provided by the US National Oceanic and Atmospheric Administration (NOAA).

June 2015 marks the third month this year that has broken its monthly temperature record, along with March and May. The fresh high’s set off warm weather alerts as heatwaves gripped places such as Austria, Spain and Australia. Moreover, the soaring temperatures killed hundreds of people in India and Pakistan last month.

WMO notes that the other months of 2015 were not far behind: January and February were each second warmest for their respective months and April was fourth warmest.

The Balkans and Southern Europe remain in the grips of a heatwave, Ms. Nullis said, explaining that there were red alerts in Hungary, parts of Bosnia-Herzegovina, Croatia, Serbia and southern Switzerland. In the United States, the heat wave that had been gripping southern and eastern parts of the country would continue today, with heat index values between 37.8 to 43.3 degrees Celsius.”

The very high temperatures that characterized the previous six months as the hottest on record had occurred ahead of the development of El Niño, which had an overall impact on temperatures. The Australian Bureau of Meteorology today indicated that El Niño was likely to strengthen, and expected to persist into early 2016.

WMO uses a combination of datasets to compile its annual Statement on the Global Climate. The provisional statement for 2015 will be released in November 2015.

Just about three weeks ago, WMO joined with the World Health Organization (WHO) to issue a new series of guidelines aimed at addressing the health risks posed by the increasing number and intensity of climate change-related heatwaves affecting the planet.

The guidelines, entitled Heatwaves and Health: Guidance on Warning-System Development, will seek to alert decision-makers, health services and the general public through the systematic development of so-called heatwave early warning systems which, in turn, will hope to trigger timely action in reducing the effects of hot-weather extremes on health. 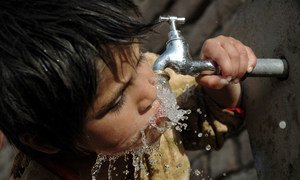 Many parts of Europe have been impacted by a severe and unusually early heatwave since 27 June, the United Nations World Meteorological Organization (WMO) has said, warning of record-breaking temperatures and wildfires in North America and torrential downpours and widespread flooding in southern China.