OCHA/Iason Athanasiadis
In Khanke, Iraq, cement foundations like these have been constructed by UNICEF with funds provided by Saudi Arabia, as part of a project that will provide basic water, sanitation and hygiene (WASH) facilities to 20,000 people.
20 July 2015

With more than 74,000 new people displaced by fighting on the move in Iraq, the United Nations humanitarian wing has warned that overall, some 40 per cent of critically needed life-saving water and sanitation programmes will be forced to shut down by the end of the month due to lack of funding.

“Provision of an effective WASH response across the country remains severely constrained by lack of funding. 28 per cent of WASH programmes have already closed due to lack of funding,” the report said. “An additional 12 per cent will close by the end of July.”

“There is critical need for funding and supplies to cover WASH service provision in new camps that are being established,” OCHA warned. “Of the $43.9 million requested under the Iraq Humanitarian Response Plan for WASH support, only $3.9 million has been received thus far.”

OCHA also reported limited funding for shelter and other non-food supplies, which to date, has received 6 per cent of the $95 million requested and warned that nearly 90 percent of all humanitarian health programs will be closed by October 2015 if additional funding is not secured.

“Limited funding continues to constrain and threaten the delivery of aid to people in need,” the report said.

Wide-scale violence and armed conflict erupted in Iraq in January 2014. Initially concentrated in Anbar Governorate, with the cities of Ramadi and Falluja particularly affected, the violence and its impact quickly grew, displacing over 500,000 individuals by May, according to OCHA.

In June 2014, the Islamic State of Iraq and the Levant (ISIL), together with other armed groups, attacked and seized control of Mosul and large portions of northern Iraq, including areas of Diyala, Kirkuk, Ninewa, and Salah al-Din governorates. This has led to ongoing armed conflict, massive internal displacement, serious and systematic violations of civilian protection and basic human rights, interrupted access to basic services, and severe strain on host communities.

As a result, Iraq is now contending with one of the largest humanitarian crises in the world, with over 8 million people in need of humanitarian assistance as of July 2015. 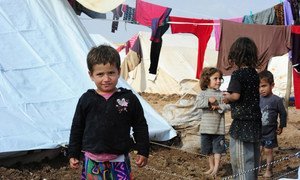 The ongoing conflict in Iraq continues to exact a “terrible” and deadly toll on the country’s civilians, particularly in the areas still under control by the so-called Islamic State in Iraq and the Levant (ISIL), according to a new report released today by the United Nations.