16 July 2015
The United Nations Security Council has welcomed the initialling of the Libyan political agreement in Skhirat, Morocco on 11 July as the latest step towards resolving the country's political crisis.

The agreement’s initialling is the result of ongoing UN-facilitated consultations between various Libyan parties and comes amid sporadic fighting across the North African country.

“The members of the Security Council recognized the political will and courage demonstrated by those who initialled this draft agreement, which seeks to resolve Libya’s institutional and security crises,” the 15-member Council declared in a statement issued late this afternoon.

The largest bloc of internally displaced people (IDPs), some 105,000, is located in Benghazi, where the UN has been working with the municipality, as well as local and international non-governmental organizations (NGOs) to distribute items to some 6,000 of the most vulnerable IDPs between March and June.

In today’s statement, the UN body voiced its support for the formation of a Government of National Accord to help rebuild the country, and “to tackle the growing threat of terrorism in Libya and its neighbouring countries.”

Additionally, the Council encouraged UNSMIL to advance relevant efforts for coordination of international assistance to a future Government of National Accord.

The Council was briefed yesterday by the UNSMIL chief Bernardino León who said that a peaceful transition in Libya will only succeed through a significant and coordinated effort in support of a future Government of National Accord and by ensuring that sufficient security is achieved throughout the country so that public administration can resume its key functions.

“A Government of National Accord can be the only interlocutor through which the growing threat of Da’esh [also known as the Islamic State of Iraq and the Levant, or ISIL] and its affiliate groups can be effectively tackled, he said. 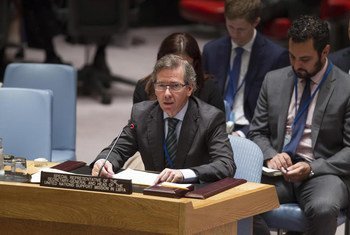 15 July 2015
A peaceful transition in Libya will only succeed through a significant and coordinated effort in support of a future Government of National Accord and by ensuring that sufficient security is achieved throughout the country so that public administration can resume its key functions, the top UN official in Libya told the Security Council today.