According to the World Health Organization’s (WHO) Mental Health Atlas 2014, on average, globally, there is less than one mental health worker per 10,000 people – a number which falls below one per 100,000 people in low and middle-income countries.

The WHO notes that the crisis is further compounded by the dramatic number of people reportedly suffering from mental health disorders which, the report says, amounts to nearly one in 10 people worldwide.

“Huge inequalities in access to mental health services exist depending on where people live,” the WHO confirmed in a note to the media issued earlier this morning. “Nearly half of the world’s population lives in a country where there is less than one psychiatrist per 100,000 people.”

The Mental Health Atlas does point out that many countries are, in fact, making progress on policy- and law-making for mental health which, the WHO says, provide “the bedrock for good governance and service development.”

At the same time, however, most of the policies and laws are not fully in line with international human rights instruments and suffer from weak implementation.

Today’s release of the report – the fourth and latest edition of the WHO’s initiative to measure progress in mental health around the world – follows the UN agency’s 2013 launch of the Comprehensive Mental Health Action Plan 2013-2020 which sets out four objectives including strengthening leadership and governance for mental health; providing comprehensive mental health and social care services in community-based settings; implementing strategies to promote and prevent mental health; and strengthening information systems, evidence and research. 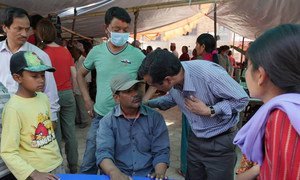 Two United Nations agencies today issued a new guide to address the growing needs of millions of adults and children suffering from mental health problems in humanitarian emergencies around the world arising from natural disasters, disease outbreaks and armed conflicts.