ECA
Delegates at the opening of the Third International Conference on Financing for Development, in Addis Ababa.

14 July 2015
Negotiations on a comprehensive financing framework for sustainable development resumed today in Addis Ababa, Ethiopia, where Member States have gathered for a United Nations conference aimed at securing the resources necessary for the well-being of all people and the health of the planet.

Deliberations are being held in the 'Main Committee' established by the Third International Conference on Financing for Development with a view to finalizing the outcome document, which will be known as the Addis Ababa Action Agenda once it is adopted.

Chaired by Ethiopia's Foreign Minister, Tedros Adhanom, the committee has before it the task of bridging differences on three main areas of contention in the 35-page draft outcome document.

The final text, once adopted, will support the implementation of the post-2015 development agenda, including the set of Sustainable Development Goals (SDGs) that world leaders are expected to adopt this September.

In an interview with the UN News Centre, Alexander Trepelkov, Director of the Financing for Development Office in the Department of Economic and Social Affairs (DESA), highlighted the unresolved issues, which include the principle of common but differentiated responsibilities.

“In view of the fact that the Addis Action Agenda goes beyond the Monterrey Consensus [the outcome of the first development financing conference, held in Mexico in 2002] to address all the three dimensions of sustainable development, developing countries propose to make explicit reference to the principle of common but differentiated responsibilities as it applies to financing sustainable development as a whole.”

Currently, the reference to this principle is contained in the paragraph dealing with climate finance.

The second area of contention relates to the area of international cooperation on tax matters. “In general, developing countries, as a precondition to agreeing to the universal financing agenda, are asking for a more inclusive mode of discussion and a seat at the table in policy decision-making on financing for development,” Mr. Trepelkov explained.

In that context, developing countries are proposing upgrading the UN Committee of Experts on International Cooperation in Tax Matters to an intergovernmental body, or at least to strengthen the Committee vis-à-vis the role of the Organisation for Economic Cooperation and Development (OECD) on tax cooperation.

“The exact relationship between the UN work on tax matters and the OECD work in the same area remains to be clarified,” Mr. Trepelkov stated.

Thirdly, the precise relationship of the Addis outcome document and the post-2015 development agenda still needs to be agreed.

The conference that began on Monday includes plenary sessions, round tables and side events held all around Addis Ababa. It is being held at the highest political level, with 28 heads of State, vice presidents and heads of government; six deputy prime ministers; and 95 ministers and vice-ministers attending.

In addition, some 1,000 representatives from civil society and the business sector are expected to be in Addis for the conference, which concludes on Thursday. 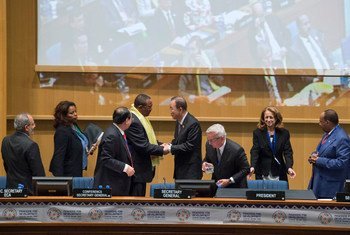 13 July 2015
At a critical moment in what the United Nations has dubbed “a year for global action,” the Third International Conference on Financing for Development kicked off today in the Ethiopian capital with calls to ensure the necessary resources to improve people's lives while protecting the planet.