Just days after marking the somber fourth anniversary of South Sudan’s independence, United Nations Secretary-General Ban Ki-moon today urged the leaders of the country to end hostilities and to move beyond their “partial interests” and show courage and leadership.

“Today, I repeat my call to President Kiir and former Vice-President Dr. Riek Machar to give up war – for the sake of the people and future of South Sudan. I urge them to compromise, forge a political deal and make true on their promises to protect their people,” declared Secretary-General Ban Ki-moon from Addis-Ababa, where he is attending the Third International Conference on Financing for Development.

Speaking to the press after a “productive” meeting with Hailemariam Desalegn, Prime Minister of Ethiopia, and Nkosazana Dlamini Zuma, Chairperson of the African Union Commission, he said the United Nations is offering full support to Intergovernmental Authority on Development Partners Forum (IGAD), “so that collectively we show the parties a single way forward.”

“We are in agreement. The conflict in South Sudan must stop,” Mr. Ban stated.

Recalling vividly the high hopes invested in this new nation at its birth four years ago, he said he was “heartbroken” for the people of South Sudan whose aspirations for a peaceful and prosperous future have been “shattered so unnecessarily, so tragically.”

The humanitarian situation in the country is “appalling”, with over 1.6 million displaced people and over 600,000 refugees in the neighboring countries, and close to 4.6 million facing severe food insecurity. Parties must respect international humanitarian law and enable unfettered access to those in need of assistance, stressed the Secretary-General.

Deeply disturbed by the level of violence and the unspeakable atrocities committed against civilians, he reminded all parties to the conflict that those responsible for serious human rights violations will be held accountable.

Convinced that peace in South Sudan also requires support from its neighbors, the UN top official also urged Uganda President Yoweri Museveni and Sudan President Omar Al-Bashir to use their influence on the parties to help end this conflict.

The UN Mission in South Sudan (UNMISS) is now accommodating more than 150,000 internally displaced persons, which is a figure that it was never deal with in the first place. Despite this difficult position, UNMISS is doing its best to provide life-saving support to them, added the Secretary-General, expecting South Sudan authorities to “fully” cooperate and provide support. 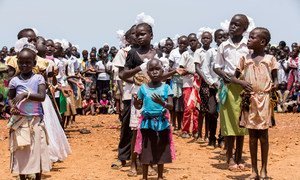 The people of South Sudan are preparing to mark the fourth anniversary of their country's founding amid ongoing suffering, unconscionable levels of violence and unspeakable sexual abuse, according to United Nations Secretary-General Ban Ki-moon.