In today's statement, Mr. Ban's spokesperson said the Secretary-General looked forward to “the speedy conclusion of the full agreement and its implementation.”

“The act is a clear demonstration of political will and courage and brings the country one step closer to resolving the current institutional and security crisis,” the spokesperson continued. “The Secretary-General calls on all Libyans to move the political transition process forward, in a spirit of unity, through the formation of a Government of National Accord.”

The fighting in Libya has provoked a growing displacement crisis within the country with the number of people displaced almost doubling from an estimated 230,000 last September to more than 434,000, according to the UN's refugee agency.

The largest bloc of internally displaced, some 105,000 people, is located in Benghazi, where the UN has been working with the municipality, as well as local and international NGOs to distribute items to some 6,000 of the most vulnerable IDPs between March and June.

To that point, UNSMIL head and the Secretary-General's Special Representative for Libya, Bernardino León, celebrated the initialing of the Libyan Political Agreement as “a very important step on the road to peace” which all stakeholders had been long seeking to achieve.

“Through this text,” Mr. León declared from Skhirat as he addressed the ceremony of the initialing of the Agreement, “you are laying the foundation for a modern, democratic state based on the principle of inclusion, the rule of law, separation of powers and respect for human rights.”

Both Mr. Ban and Mr. León confirmed the UN's continued support for the Libyan people as the country's stakeholders now move forward in building institutions and good governance. 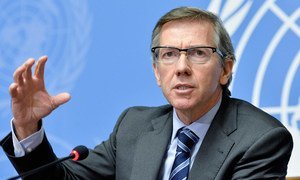 The Secretary-General's Special Representative for Libya, Bernardino León, has condemned the escalating hostilities in the country's eastern city of Benghazi and the heavy toll being felt by the area's civilians, the United Nations mission in the country confirmed today.