In 1995, a government soldier reads out the names of soldiers who are confirmed survivors or escapees from the fallen city of Srebrenica. UNICEF/NYHQ1995-0553/LeMoyne
11 July 2015

The international community has grown ever more vigilant to the warning signs of human rights abuses since the days of the tragic Srebrenica massacre twenty years ago but much more still remains to be done, United Nations Deputy Secretary-General Jan Eliasson declared today.

“I wish that I could say that the genocide which occurred here made the world realize the curse of hate and the folly of division,” the Deputy Secretary-General said in remarks delivered at a commemoration of the Srebrenica genocide held at Potoèari in Bosnia and Herzegovina.

“But,” he added, “tragedies still take place with grim frequency.”

From the ongoing conflict in South Sudan where millions have been displaced to the relentless fighting in Syria, Member States and the United Nations itself, he said, still had “many lessons to learn,” particularly when confronting the effects of hate against vulnerable communities.

“We must stand up for, defend and live up to the values of the United Nations Charter,” Mr. Eliasson continued. “We must strengthen humanitarian action around the world. We must uphold the responsibility to protect. We must act at the first sign of violence, at the earliest warnings of atrocities.”

The UN official's remarks come just days after he, along with UN High Commissioner for Human Rights, Zeid Ra'ad Al Hussein, urged the UN Security Council to implement better efforts aimed at prevention and greater cohesion among the international community as it confronts the growing litany of crimes against humanity perpetrated around the world.

Both officials, furthermore, acknowledged with regret that the UN and Member States could have done more to prevent the massacre at Srebrenica in July 1995 when thousands of ethnic Bosnian Muslim men and boys were slaughtered during a week of brutality.

“It is by concrete and courageous action that we best honour the victims of Srebrenica. We are running out of words of regret and statements of good intentions,” Mr. Eliasson told those gathered at today's event.

“Now is the time for action,” he concluded. “To stand up everywhere, every time, with courage and without hesitation for life and human dignity.”

Deputy Secretary-General Jan Eliasson immediately condemned the “deplorable” attack in a statement which noted that the incident was “far removed from the spirit I felt at this dignified and solemn commemoration.”

“This incident must not detract from what we are to learn from Srebrenica,” he added. “Genocide must never occur again.” 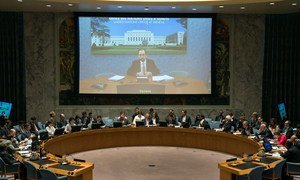 As the United Nations Security Council failed to adopt a resolution that some of its permanent members called “vital for reconciliation” and others called “divisive,” senior UN officials stressed that the horror of the genocidal massacre at Srebrenica continued to haunt the Organization 20 years after thousands of ethnic Bosnian Muslim men and boys were slaughtered during a week of preventable brutality.