UNHCR/I. Prickett
Syrian refugees fleeing the fighting near the Syrian city of Kobani wait in a holding area before boarding buses in Turkey (September 2014).
10 July 2015

“Not since the end of the Second World War have so many people been forced from their homes across the planet,” UN Secretary-General Ban Ki-moon said in his message on the Day, which is observed on July 11 as a day to focus attention on the urgency and importance of population issues.

“With nearly 60 million individuals having fled conflict or disaster, women and adolescent girls are particularly vulnerable,” Mr. Ban said. “Violent extremists and armed groups are committing terrible abuses that result in trauma, unintended pregnancy and infection with HIV and other diseases. Shame and accountability rest squarely on the shoulders of the perpetrators who wage cowardly battles across the bodies of innocents.”

“We must staunchly protect women's health, including their sexual and reproductive health, and address their needs as a priority in emergency relief operations,” he said. “At the same time, we must continuously advance women's human rights in times of both turmoil and calm in order to enable them to help avert conflict, stand strong should it strike, and foster the healing that is so badly needed in war-torn societies.”

Noting that “as the United Nations marks its 70th anniversary this year,” the UN chief urged countries “to commit to bold results that will make 2015 a time of global action, putting people first so that they help build resilience, peace and sustainable prosperity for generations to come.”

The Executive Director of the UN Population Fund (UNFPA), Babatunde Osotemehin, in his message, said that one of the priorities of his agency is to empower and safeguard the well-being of women, adolescent girls, and young people and address their specific needs and concerns.

As part of its emergency response, “UNFPA deploys hygiene kits, obstetric and contraceptive supplies, trained personnel and other support to vulnerable populations,” Mr. Osotemehin said. “It also works to ensure the needs of women, adolescent girls and young people are served through both an emergency and the reconstruction phase.”

“On this World Population Day, we call on the international community to redouble efforts to protect the health and rights of women and girls,” he said.

As part of its outreach efforts to raise awareness this year, UNFPA has started a conversation on Twitter with the hashtag #WPD2015, and on Saturday plans to hold a panel discussion in Bangkok on meeting on the needs of vulnerable people in humanitarian crises and in Kazakhstan, a festival convened with Hard Rock Cafe Almaty, Red Crescent Society and Department of Emergency of Almaty, will include flash mobs, information sessions on responsible behaviours in emergencies, trainings on emergency assistance, and theatrical performances by youth organizations. 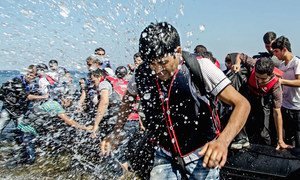