UNHCR/B. Loyseau
Burundian refugees, mostly women and children, wait on the shore of Lake Tanganyika to be transferred by boat to Kigoma and then on to Nyaragusu refugee camp.
10 July 2015

One day after United Nations High Commissioner for Human Rights Zeid Ra'ad Al Hussein alerted the Security Council about the seriousness of the electoral crisis in Burundi, his Office today issued a new warning about the impact the “extremely tense situation” there could have on the stability and the development of Central Africa.

Indeed, more than 145,000 people have already fled to neighboring countries less than a week before the presidential election, set for July 15, and ten days after parliamentary and local elections, which took place in an atmosphere far from conducive to a free, fair and inclusive vote, explained the Spokesperson for the Office of the High Commissioner for Human Rights (OHCHR), Rupert Colville, during a press conference in Geneva.

“Polls were boycotted by opposition parties, with outbreaks of violence, including small-arms and grenade attacks,” he stressed.

Over the past two months, UNHCR office in Burundi has documented over 300 cases of arbitrary arrest and detention of demonstrators, human rights defenders, political opponents and journalists. Numerous cases of torture and other forms of ill-treatment in detention were also reported.

“A severe crackdown on independent media has led to the closure of most private media and radio stations. Large numbers of journalists and human rights defenders have fled Burundi for fear of reprisals. Peaceful protests have been met with unwarranted use of force, including lethal force, in violation of Burundi's obligation under national and international law to guarantee the right to freedom of assembly,” Mr. Colville continued.

Recently, key members of the Pierre Nkurunziza's own political party and government have fled the country, the Spokesperson added.

“Our field office has also documented dozens of killings, most of them shootings of demonstrators and human rights defenders by members of the Imbonerakure militia and security forces,” he said, urging the authorities to disarm this militia without delay.

Refugees interviewed by our staff in the Democratic Republic of Congo (DRC), Rwanda and Tanzania continue to refer to the Imbonerakure as the main threat, but some have also stated that militants from other groups are also employing violence – a new and disturbing development.

“Media interviews carried out in the past couple of days, with leaders of the attempted coup in May, who talk openly of organizing military units and of resorting to the use of force, are alarming. We call on all sides to make serious and urgent efforts to find a peaceful solution to this crisis before it leads to uncontrollable violence,” concluded Mr. Colville. 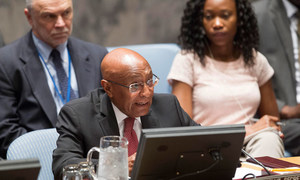 Two weeks after the contested legislative and communal elections that took place in Burundi and with presidential polls just days away, senior United Nations officials warned the Security Council today that situation prevailing in the Central African country is once again at risk of sliding into violence.